‘The Martian’ traverses its own cinematic trajectory 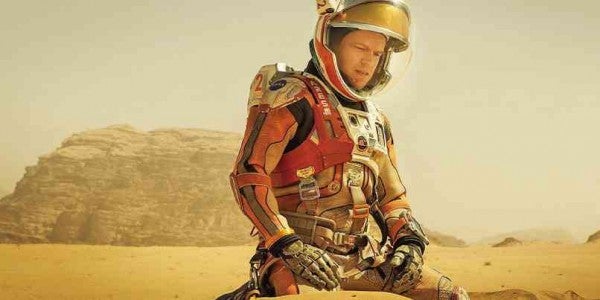 DAMON. Rare ability to vivify man’s courage, will to live and life-affirming creativity.

After “Gravity,” movies set in outer space have had to work extra-hard to avoid ending up as also-rans to that visual and sci-fi marvel by Alfonso Cuaron, starring Sandra Bullock.

After quite a long while, we’re happy to view another film that matches Cuaron’s movie’s achievement and impact, while traversing a different cinematic trajectory of its own—“The Martian” by Ridley Scott, top-billing Matt Damon.

In a key sense, Ridley’s film is an even more remarkable achievement, because it succeeds in holding viewers’ rapt interest and involvement while introducing them to a number of complex scientific principles—while not forgetting the human life that those principles are harnessed to preserve!

This combination of science and heart is what makes “The Martian” a compelling viewing experience.

The film shows what happens when a mission to the planet Mars is canceled due to imminent danger to the astronauts involved, who are forced to leave a dead colleague behind.

What they don’t realize until much later is that the “deceased” astronaut (Matt Damon) is in fact alive—and is now faced with the “impossible” prospect of staying alive on the hostile planet until help and rescue arrive!

Thanks to his courage and his creative use of scientific principles, Damon’s character makes the impossible happen, and his former colleagues on the original mission risk their own lives to atone for the unintended “sin” of deserting him.

To make the impossible not just plausible but dramatically actualized, Scott’s film’s writers and their top scientific advisors have to believably set up and solve a number of daunting challenges:

After Damon recovers from his injuries, he has to solve the problem of generating food to feed himself, and he’s able to do so by planting potatoes in soil that used to be unable to support plant growth of any kind.

Next, he had to make people on earth realize that he was alive, despite the fact that he had absolutely no way to communicate with them. After the primitive system of communication that he managed to devise worked, he realized that it couldn’t help him figure out an alternative way home, so he needed to make it much more sophisticated and versatile—and he succeeded at this infinitely more difficult task as well—to the whole world’s amazement!

Inspired by his extremely daring and creative example, other space scientists and adventurers were also able to push science beyond its usual boundaries, and figure out a way to bring the lone castaway in distant space all the way home—alive.

Granted, this last feat was well-nigh “miraculously” achieved, but viewers gave it the “suspension of disbelief” needed to make it “work.”

Other impressive achievements of the film include its ability to tell its story powerfully, believably and emphatically without using the standard ploys of feature films, like a love angle and the use of villains to pump up its fear and danger quotient.

Above all, “The Martian” banks most rewardingly on Matt Damon’s rare ability to vivify man’s courage, will to live and life-affirming creativity, much of the time all by his lonesome.

It’s a tall order for one actor to focus an entire film audience’s fears, faith, hope and love for man’s innate value and heroism—but Damon, like the character he plays, achieves the “impossible!”

Read Next
Lani Misalucha in ‘Harana’
EDITORS' PICK
1,797 more Covid-19 infections raise PH active cases to 33,603
New Year, New Rediscoveries
Acer Philippines welcomes you to its first flagship store
UP president challenges AFP claim on Reds’ campus infiltration
WHO says fabric facemasks still work against virus variants
Is your company a growth champion? Stand up and be recognized!
MOST READ
Wife stabs husband after seeing her younger self in old photos, thought he was cheating
NBI files raps vs top execs of 2 tech firms
Ate Vi’s message to those against ABS-CBN’s franchise renewal
Cop, 12 others killed in Maguindanao shootout
Don't miss out on the latest news and information.