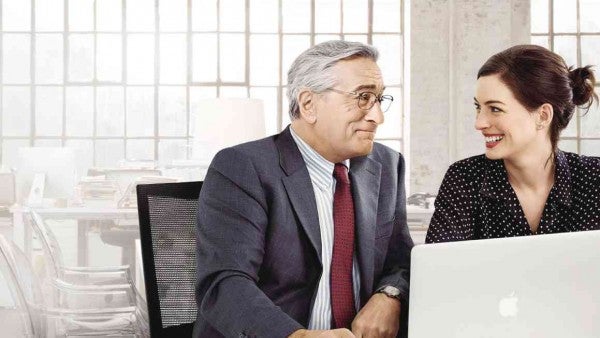 DE NIRO AND HATHAWAY. Essay fully “lived in” characters in “The Intern.”

A “small” film that’s making a big impression on viewers is “The Intern,” starring Anne Hathaway as a hotshot start-up phenomenon in today’s business world, and Robert De Niro as the retired widower who unexpectedly becomes her best friend and mentor in the bigger challenge of life itself.

Nancy Meyers’ movie insightfully shows that “old” is definitely not cold and useless, and that seniors have a lot to teach the younger generation, even in the cutting-edge world of e-commerce.

It all starts when Hathaway’s company decides to hire retirees as interns, and De Niro’s character tops the search. Hathaway is herself averse to the idea, because she thinks the “oldies” will slow her personal pace down, but she goes by her company’s more enlightened decision, secretly planning to simply put De Niro’s character in deep freeze.

But, problems arise at the office that require emergency assistance—and she’s surprised to discover that he’s the best fix-it man around! In time, he also has a positive effect on her personal life, as he helps her solve big problems that threaten her marriage.

In the end, Hathaway’s character realizes that she may be a great success in the business world, but she’s painted herself into a lonely corner in the process—and it’s her “old” intern who helps liberate her from her tight, little cul-de-sac.

This thematic thrust is constantly in danger of being too good to be true, but filmmaker Meyers astutely keeps it fairly real, so viewers know that they’re in good storytelling hands. Even better, De Niro and Hathaway fully live up to the excitement that their initial stellar team-up promises film buffs.

The two stars are so good here that they go beyond the usual “screen chemistry” ideal, to attain an even higher artistic synergy that makes them act seemingly, seamlessly as one. Their scenes together don’t come across as brilliantly and feelingly “acted” (which they are), but as fully “lived in.”

Being the more experienced actor, De Niro sets the thespic pace with his deft and by now characteristic combination of seriousness and impish wit. Hathaway isn’t known to be a standout funny girl, and her character is as “serious” as can be—but, her costar’s occasional witty asides and reactions help her relax—and entice her into coming up with occasional thespic hijinks herself!

We expect that the experience of acting with De Niro was so fulfilling for Hathaway that she’ll make it a point to perform with other senior stars and potential mentors, as well. —A new film costarring her and Jane Fonda should turn out to be another winsome winner, right? We can hardly wait!