INQUIRER.net poll: The most striking ‘Heneral Luna’ quote is… 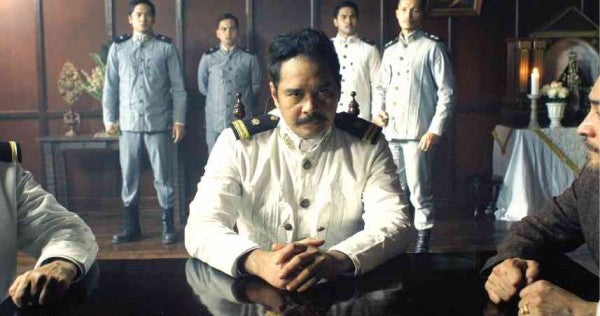 Jerrold Tarog’s historical epic “Heneral Luna,” perhaps the most talked about film today after being chosen as the Philippines’ bet in the 2016 Academy Awards, has not only posed thought-provoking questions to its viewers, but also left them stuck with a lot of quotable quotes.

Those who were able to see the highly acclaimed biopic took to social media to share memorable lines from the film and even generated memes out of them.

But which “Heneral Luna” quote is the most striking of them all? In an online poll conducted by INQUIRER.net, 29.39 percent of readers or equivalent to 1,892 out of 6,437 respondents said the quote that struck the most truthful note was “Negosyo o Kalayaan? Bayan o sarili, pumili ka! (Business or freedom? Our native land or one’s self-serving interests, choose one!)”

The line was delivered by lead character General Antonio Luna, played by actor John Arcilla, during a meeting of then President Emilio Aguinaldo’s Cabinet in Bulacan.

Luna was addressing Cabinet members who proposed the annexation of the Philippines to the United States amid fears that their private businesses would collapse in the war.

Meanwhile, more than 18 percent of respondents or 1,169 readers chose the quote, “Kaya nating magbuwis ng buhay para sa pamilya pero para sa isang prinsipyong makabayan? (We can sacrifice our life for our family but how about for a common patriotic cause?”)

Lamenting the Filipinos’ too much focus on filial interests over national consciousness, it was delivered also by Luna when he was talking to young journalist Joven Hernando, played by Aaron Villaflor.

The quote “Ang taong may damdamin ay hindi alipin (A person who has emotion is not a slave)” garnered 17.24 percent of total votes or equivalent to 1,110 respondents, while the line “Wala ba tayong karapatang mabuhay nang malaya? (Don’t we have the right to live freely?)” secured 17.03 percent or 1,096 votes. Both were delivered by Luna.

More than 18 percent of respondents or 1,170 readers said they have another quote in mind.

Produced by Artikulo Uno Productions, “Heneral Luna” breached the P150-million mark in box office as of Wednesday despite initial fears that it would be pulled out early in cinemas to give way to foreign and more mainstream local films. TVJ

The INQUIRER.net poll is not a scientific survey. It is an interactivity tool that can, within its limits, reflect the interests of online readers.