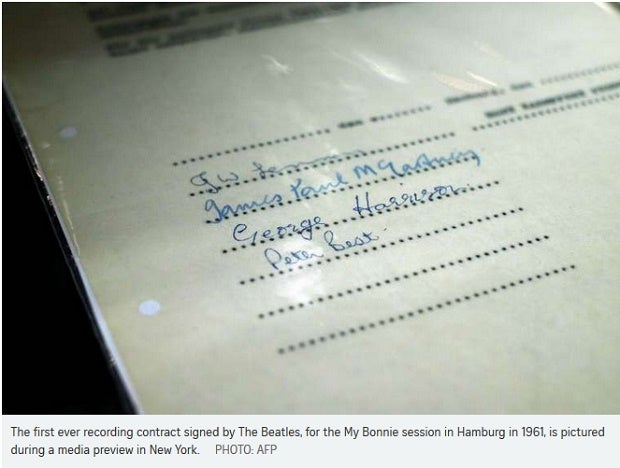 READ: Contract that launched The Beatles up for sale

The document was signed by John Lennon, George Harrison, Paul McCartney and Ringo Starr, along with their manager Brian Epstein on October 1, 1962—four days before the release of their first single “Love Me Do.”

It was the only deal signed by the four final Beatles members with Epstein, who died from an accidental overdose in 1967 and was dubbed the “fifth Beatle” by McCartney.

READ: Beatles’ first recording contract to be auctioned next month

The band had first signed a contract with Epstein when Pete Best was still the drummer. After his replacement by Starr less than nine months later, the two parties had to put pen to paper again.

“Without this contract, and the relationship it represents, it seems inconceivable that the Beatles could have achieved all that they did: it took more than inspired musicianship and song-writing to remake popular music,” said Gabriel Heaton, Sotheby’s specialist in books and manuscripts.

“The presentation, direction, and internal harmony of the Beatles all owed a huge amount to Brian Epstein.”

The new contract features the signatures of the musicians, with the fathers of McCartney and Harrison acting as co-signatories because their sons were younger than 21 at the time.

Under the contract, band members were required to give one month’s notice before leaving the group, while another clause stated that any member could be expelled “should two or more of them desire.”

The document also outlined the different commission rates that Epstein would receive for earnings of up to £400, up to £800 and more than £800 a week.