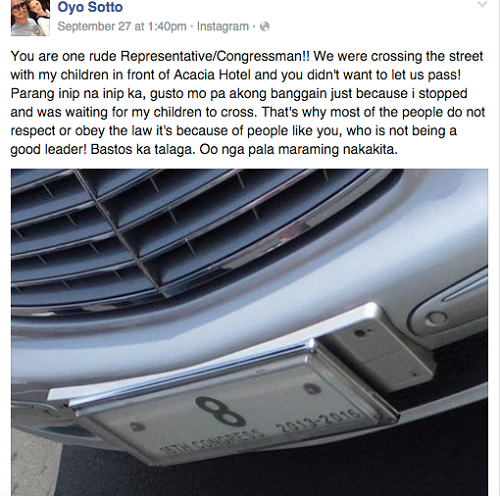 Actor Oyo Sotto took to social media to air his grievance against a motorist for being “rude” on the road while aboard a car with a license plate used by members of the House of Representatives.

In a post on his social media accounts on Sunday, Sotto said that that he and his children were crossing the street in front of Acacia Hotel in Alabang, Muntinlupa City when the driver of the car allegedly did not allow them to pass.

He alleged that the driver of the car wanted to hit him just because he was waiting for his children to cross the street.

“You are one rude Representative/Congressman!! We were crossing the street with my children in front of Acacia Hotel and you didn’t want to let us pass! Parang inip na inip ka, gusto mo pa akong banggain (You seem impatient, you even want to hit me) just because [I] stopped and was waiting for my children to cross,” Sotto said.

“That’s why most of the people do not respect or obey the law it’s because of people like you, who is not being a good leader! Bastos ka talaga (You are really rude),” he added.

In a subsequent post, Sotto posted a photo of the car in question which was a silver Mercedes-Benz sedan.

He said in a post on Monday that he was certain that the motorist who did not allow them to cross the street was the owner of the car, allegedly accompanied by his wife “seated in the passenger seat all dressed up.”

Sotto is married to actress Kristine Hermosa with whom he has three children: Ondria Bliss, Kristian Daniel, and Kaleb Hanns.

The Department of Transportation and Communications has an issuing protocol, otherwise known as low numbered plates for motor vehicles of government officials. It assigns the number “1” plate to the President; “2” for the Vice President; “3” for the Senate President; “4” for the Speaker of House of Representatives; “5” for the Chief Justice of the Supreme Court; “6” for cabinet secretaries; “7” for senators; “8” for congressmen; “9” for the associate justices of the high court; “10” for the presiding justice, other justices of the Court of Appeals and the Solicitor General; “11” for the Commission on Elections chair; “12” for cabinet undersecretaries; “14” for the Armed Forces of the Philippines chief of staff and the Philippine National Police chief; and “16” for regional trial court judges. AJH/RAM