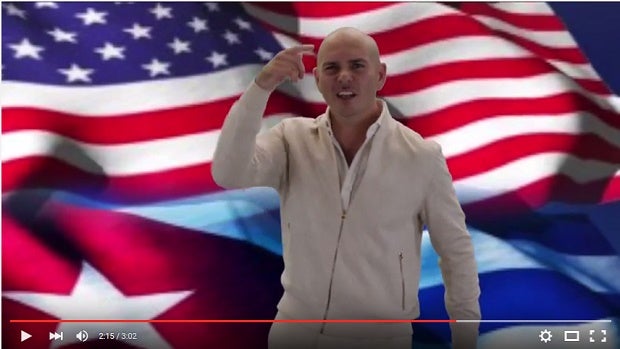 SCREENGRAB from “We’re All Mexican” official music video on Youtube

MIAMI, United States—Latin music stars including Carlos Santana and Pitbull on Monday launched a music video in celebration of immigrants, voicing alarm at the harsh turn of US political discourse.

“We’re All Mexican,” in English and Spanish with a Latin beat and mariachi brass, features images of famous Mexicans such as painter Frida Kahlo as stars say the song’s title.

With US and Mexican flags waving, the video also shows images of immigrants’ contributions to US society ranging from farm labor to Mexican cuisine.

Cuban-American producer Emilio Estefan led the initiative given the popularity in the Republican presidential nomination contest of tycoon Donald Trump, who denounced undocumented Mexicans as rapists and drug dealers.

“‘We’re all Mexican’ is a metaphor symbolizing that we can all become the victims of racism and bigotry at any moment,” said a statement accompanying the video.

Without referring directly to Trump, the statement denounced the vilification of Mexicans but said their situation was not unique.

“Around the world, different immigrant groups are harassed and made to be scapegoats for the ills of their respective countries of residence,” it said.

“The song celebrates the positive contributions of immigrants in the United States as a balance to the negativity being expressed publicly,” it said.

Other stars in the project include Haitian-born rapper Wyclef Jean of Fugees fame and Oscar-winning actress Whoopi Goldberg.

Trump, the property mogul and television star who has defied all political odds to lead the Republican race ahead of the November 2016 election, stunned many across the United States when he described Mexican immigrants as rapists.

Hispanic-Americans are the largest and fastest growing US minority; most Latinos are of Mexican descent or origin.

And Republicans need to court Hispanics’ votes to win the White House.

Trump, 69, also wants to build a wall along the US-Mexican border.