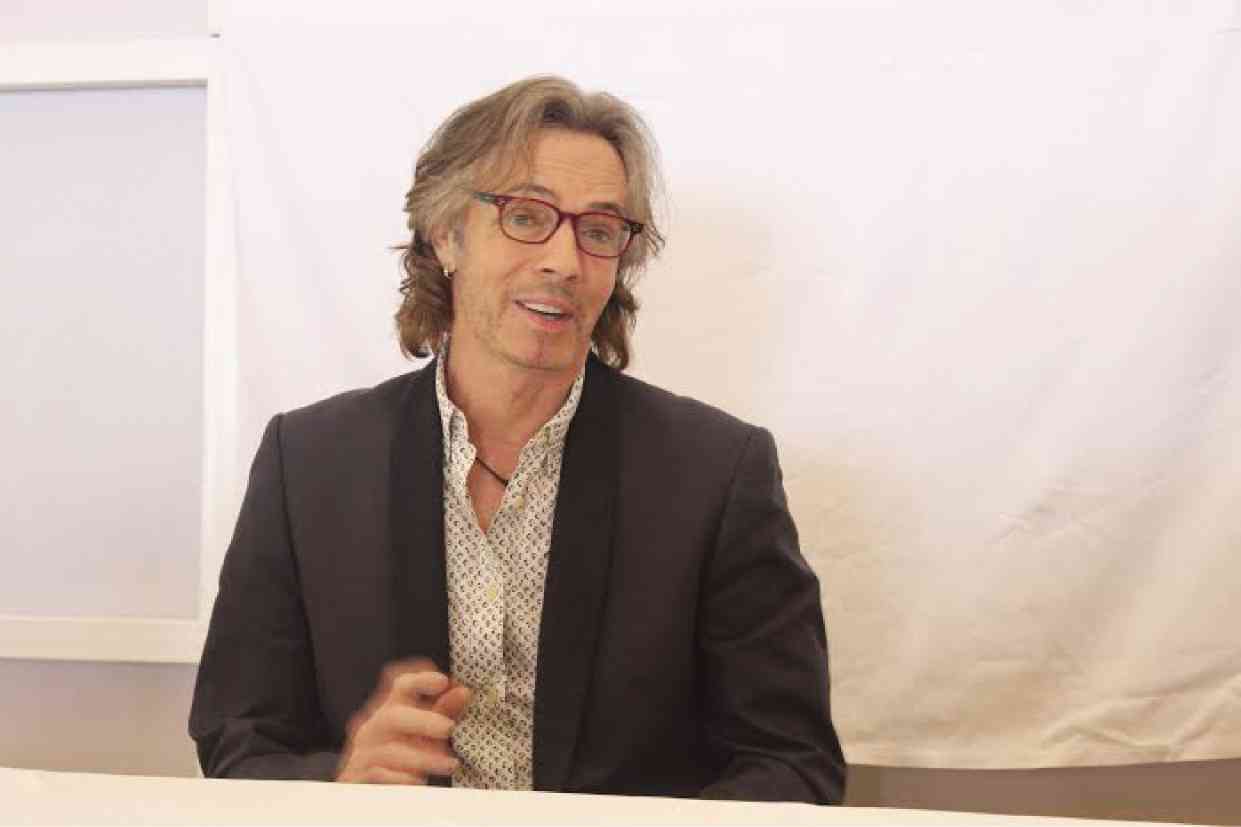 RICK Springfield the rock singer is no stranger to acting. Ruben V. Nepales

LOS ANGELES—Rick Springfield, acting opposite Meryl Streep, is the wonderful surprise in “Ricki and the Flash.” The Grammy winner holds his own against the legendary actress, with the duo exhibiting good chemistry as lovers and bandmates. Director Jonathan Demme reportedly was considering two actors until Rick walked in to audition—he just played with Meryl and three musicians. “He claimed the part immediately,” Jonathan was quoted as saying.

Rick brings quiet intensity and a noble presence to his character, not to mention true musicianship and joy in the music scenes with Meryl, who stars as bandleader Ricki, and the real-life musicians who complete her group: bassist Rick Rosas, who has passed away, drummer Joe Vitale and keyboardist Bernie Worrell.

Of course, Rick is no stranger to acting. He was the beloved Dr. Noah Drake in the soap, “General Hospital,” and his recent credits include Season 2 of “True Detective” and “Californication.” One of the first Australians to make it big in the United States, Rick has been successfully combining his singing and acting careers over the years. The singer behind “Jessie’s Girl,” his most popular hit, is also a writer with a best-selling novel, “Magnificent Vibration” (he’s penning a follow-up), and an autobiography, “Late, Late at Night.”

He has a new CD, “Mayhem,” coming out in October.

In person, Rick is soft-spoken and has a gentle demeanor. The singer-actor is looking good at 66, still sporting long hair that’s graying but adds to his dignified presence. He choked at one point in our chat when he talked about his father.

The rocker admitted that he’s a bit hard of hearing. “I’ve been too long in front of the guitar amp,” he explained. The following are excerpts from our interview.

In my interview with Meryl, she mentioned your name with a deep sigh of admiration.

It is mutual, which is good. It plays on screen. That was the first thing they looked for—the chemistry between the two of us before I even read… or anything. I am very judgmental of myself. I usually don’t like seeing myself on screen.

But they made me view this picture and I actually liked it. I saw the onstage chemistry which was great and I am very happy with it. Being in a movie with Meryl Streep is like being in a band with Paul McCartney.

What did she tell you, going into the scenes?

She said, “Don’t be nervous.” I was very nervous but she knew that. Everyone was going, oh my God, it’s Meryl Streep. She knows how to diffuse that situation. She is very charming and very real. She has no attitude. I found that a lot of the people you think are going to have attitude don’t. The most successful people actually don’t have attitude. They are okay with who they are.

What tips did you give Meryl, music-wise?

I did give her tips on the guitar. She would ask me things—how to hold it and does this look real? Actually on stage, she looks more at home with the guitar than I do, which really bummed me out (laughs).

Apparently, she learned to play the guitar for this role.

An electric guitar is a very different instrument than an acoustic guitar. It requires more technique and she nailed it. I was incredibly impressed. She just has a gift for pushing herself which I try to do myself. She pushed herself and achieved this remarkable stuff.

Is Meryl one of the knockout talents you’ve met?

My wife (Barbara Porter) has knocked me out a couple of times (laughs). Oh, I see what you are saying. Certainly in the acting field, yes, Meryl is at the top of her game. 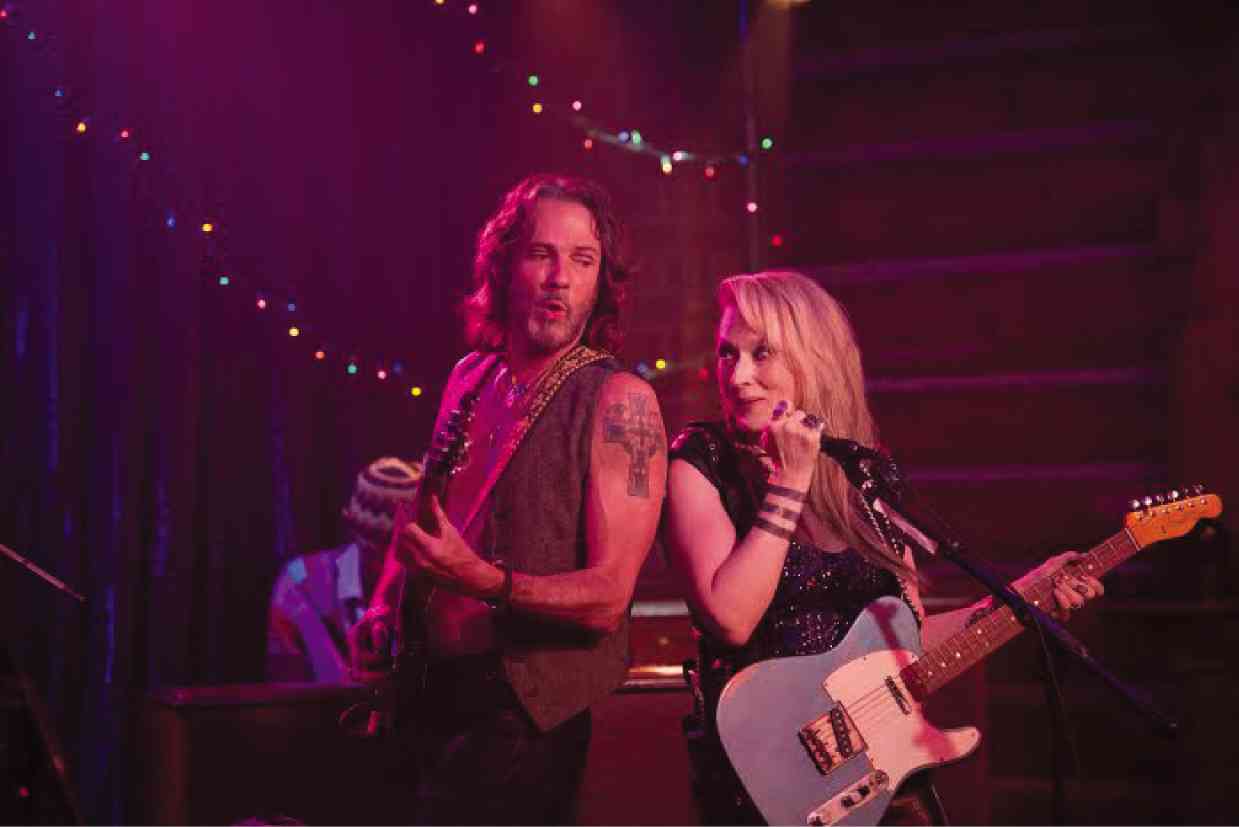 THE ROCKER gave Meryl Streep tips on the guitar.

Did you and Meryl talk about her children and yours following in your footsteps?

Meryl and I had our little moments about our kids now and then. My older son (Leo, aka Liam Springthorpe; Rick’s other son is Josh) is a musician and an actor.

Mamie (Gummer) is amazing. She so nailed the whole love/hate thing that she (her character Julie) had with the parents. I don’t know how it would be to work with your own kid in a movie. They (Meryl and Mamie) did it amazingly. They used it (their relationship) rather than have it stand in the way.

To what do you credit your longevity in the industry?

Injections of young blood (laughs). I have always been very driven. I always want to push myself and this movie was pushing myself, too. I wrote my first novel and I have my 18th record coming out in October. I always want to do new things.

How do you stay in shape?

If you love what you do, if something pulls you out of bed in the morning, that’s the most powerful thing in your life. Music and art—I have always wanted to get up in the morning and do something with it. I am very fortunate to have been able to make a career out of it.

I have always watched what I eat. My dad died early. That made an impact. He died from not eating properly. He was in the war. It was in the 1950s and 1960s and they didn’t really know how to eat well. I have a very careful diet. I work out all the time. I am mentally active.

Everyone has to make sacrifices if they pursue a career out of the ordinary. I actually had a friend in Australia whom I grew up with, who was a guitar player, too, and wanted to do that. He chose a safer course.

I chose a more dangerous course. I had some success in Australia. I look back on leaving Australia and coming to America. It was a pretty ballsy move. But I never saw my dad again. So that was a sacrifice.

How do you make your acting choices?

I like to do things that are unexpected. I did my run of playing the good doctor, dad and husband and that kind of thing. So, certainly in “Californication,” it was Rick Springfield but it was really a character and an over-the-top one. In “True Detective,” I am basically unrecognizable in a completely different character. As an actor, I like to experiment and push it.

How are you able to combine a career and family all these years?

I have been with my wife for 30 plus years. She’s been the rock and I have been able to be the bird flying around. She’s an incredible person. She’s the reason that our family is still together.

What is your relationship to “Jessie’s Girl” now? How do you react when you hear it in public?

There’s a double side always to it. Life is like that—yin-and yang. I will have a new record and go on talk shows to talk about it. And they will play “Jessie’s Girl” (laughs). But I am fortunate to have a song like that.

Do you still perform the song in your concerts?

Yeah, of course. Are you kidding? They would lynch me if I didn’t.