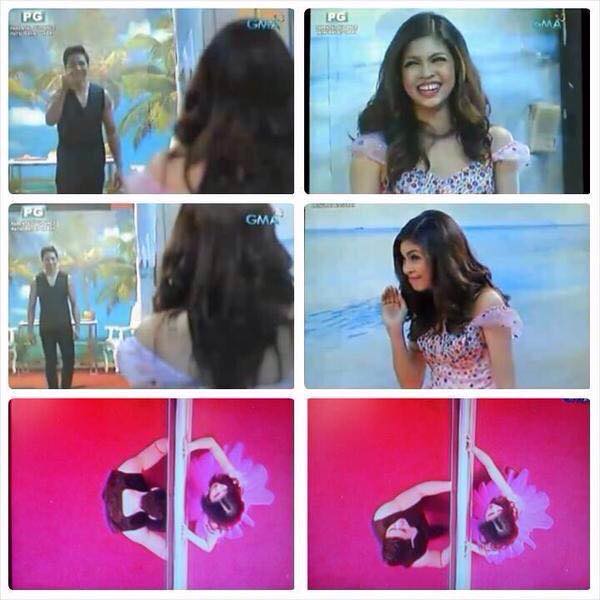 Alden Richards and Yaya Dub’s finally meet before a wall literally comes in between them. PHOTO FROM EAT BULAGA’S FACEBOOK PAGE

It was a meeting almost two months in the making.

After what seemed an eternity, Alden Richards and Maine “Yaya Dub” Mendoza have finally seen each other in the flesh.

But before they could talk in that rather electrifying and intimate moment at the backstage of Broadway studio, their view was completely blocked by a wall drawn down by Lola Nidora.

Lola Nidora (played by Wally Bayola), Yaya Dub’s boss in the program’s hit “Kalyeserye” segment, allowed her loyal servant to join in the contest on the condition that she would not meet with Alden.

As lovers who endeared millions of Filipinos for their split-screen chemistry, Alden and Yaya Dub have never met before in person and have only interacted on screen.

Not letting the opportunity slip through their fingers after two botched meetings, the pair broke their promise to Lola Nidora and tried to seek each other around the studio after their performance.

And it seemed the whole world stopped when the two finally laid their eyes on each other.

But Lola Nidora was quick to destroy the moment. She later reprimanded the two by dishing out the lessons in life they must first keep in mind before they get into a relationship.

Later in the episode, Yaya Dub was kidnapped by two men wearing bonnets and was whisked away on a van.

Just as in previous episodes of the “Kalyeserye” segment, the hashtag #ALDUBBATTLEForACause peaked as the top trending topic worldwide and the Philippines. It made history after garnering more than 5 million tweets, according to TAPE, INC.’s executive Malou Choa-Fagar. IDL