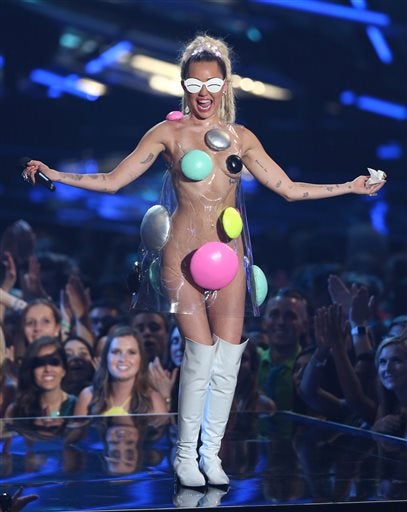 Cyrus’ exposure came near the end of Sunday’s MTV Video Music Awards. She peeked her head out from behind a black curtain that covered up all but her head, then the curtain slipped to briefly reveal a bare breast.

MTV said it cut the unexpected glimpse of flesh for reruns of its annual televised party.

By the next morning, it wasn’t even watercooler fodder. Kanye West’s rambling acceptance of a career achievement award and declaration of his 2020 presidential candidacy was the hot topic on a program known more for outlandish pop culture moments than awards.

It was a far different venue and era when Jackson’s wardrobe malfunction during the 2004 Super Bowl halftime show, aided by Justin Timberlake, provoked 1.4 million complaints to the Federal Communications Commission. The FCC fined CBS $550,000, and the case dragged through the courts until 2012, when that verdict was overturned.

The FCC had no immediate count on any Cyrus complaints on Monday, and it wouldn’t matter much anyway because the commission has no jurisdiction over cable or satellite networks.

Sheer numbers limited Cyrus’ exposure, even if the curtain didn’t. The 2004 Super Bowl was seen by an estimated 86 million viewers. The Nielsen ratings company said the Video Music Awards was seen by 9.8 million people.

“You can go online and see Rihanna’s nipples on her Instagram account,” Quarles said. “There’s nothing exciting about it anymore.”

Similarly, not much work is required for a glimpse of Cyrus’ bare breasts. The 22-year-old former child star has posed for a handful of nude or topless magazine portraits in the past few years.

Since finding one of those risque moments, like when Cyrus twerked with Robin Thicke during the 2013 program, is the whole point of the VMAs, a flash couldn’t have been considered much of a surprise.

“About as surprised as we’ll be if the sun rises in the east tomorrow morning,” he said.