Meryl Streep learns to play guitar for ‘Ricki and the Flash’ 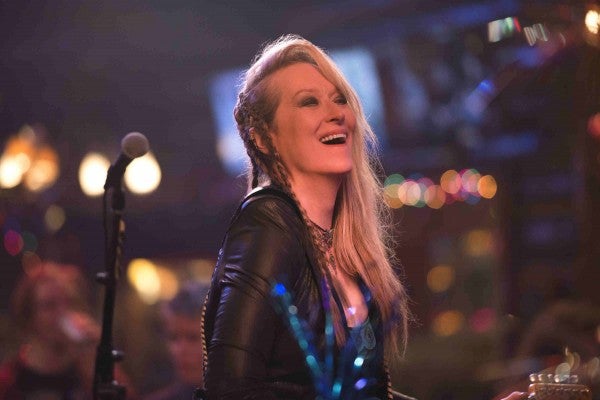 Streep stars as Ricki Rendazzo, a guitar heroine who made a world of mistakes as she followed her dreams of rock ‘n’ roll stardom. Returning home, Ricki gets a shot at redemption and a chance to make things right as she faces the music with her family.

“We all have to live with our mistakes,” says Streep. “I think she wishes that her kids liked her more, understood her – I think that is a regret – but she’s pretty clear-eyed about it. Ricki lives in the moment – she acts on the impulse that feels imperative to her. It’s a relief to play someone who doesn’t act how everybody thinks she should be. She’s saying, ‘I can’t help being the way I am.’”

Though Streep was the first, best, and only choice to play the role, she would have to learn to play guitar to bring Ricki to life. Demme’s vision for the film, from the very beginning, was to make the band real. “With this kind of character-driven film, we have to make people feel like it’s real,” he says. “It never occurred to me to do anything other than make the band real. The customary thing is that the band pretends to play, and you overlay a previously-recorded, perfect track, but I didn’t want to do that – I wanted this great band, with Meryl at the center, to really get out there and play.

Streep, already a talented singer, trained for months to play the guitar, including several weeks with guitarist Larry Saltzman and several more with legendary Los Angeles session player Neil Citron. “To begin with, I started learning on an acoustic guitar with a teacher in New York and then moved to the electric guitar about a month later,” Streep explains. “Then I worked pretty much every day with Neil Citron, who is this genius guitar teacher. He put the telecaster in my hands and taught me a lot of little tricks that rock ‘n’ rollers use, bar chords, quick changes and stuff like that.”

She says that she found the electric guitar easier to play, “but your mistakes are much louder. With an acoustic, you get away with it. With an electric, you have to be really committed to that bad note because it’s ringing through the hall! It was such a lot of fun.”

“I never doubted for a second that Meryl wouldn’t become an excellent rhythm guitar player, because I know she’s a research beast,” says Demme. “She works as hard in the months leading up to a movie as she does when she’s shooting it.”

“Learning guitar was fun, but it was a private enterprise and then all of a sudden Jonathan said, ‘We’re going to get two weeks and the band’s going to get together.’ I thought, two weeks?! Two weeks to become a band?” Streep recalls. “It didn’t seem like enough time, but those guys were so great. They were very gentle with me and forgiving in the very beginning, because I really couldn’t keep up with them. Then, around the sixth day, we hit a groove and then we couldn’t stop playing. We played and played and played and I really get why Ricki wanted never to give that up, because it’s soooooo much fun.”

The rehearsals were so intense that the band barred all outsiders – even Demme himself – from the sessions. “That was fair,” Demme laughs. “When I finally showed up, three weeks in, and I entered the little room where they were playing, they were up on the bandstand and there was Meryl Streep, right in the middle of it, looking like she’d been doing it all her life. It was thrilling – the only thing more thrilling was when we started shooting and really seeing them play in front of a live audience.”

“Originally, Jonathan said, ‘Three songs, it’s going to be easy, you’re going to have two weeks of rehearsal and three songs, tops!’” says Streep. “Well, there are ten songs in the movie – ten! – and that’s hard.”