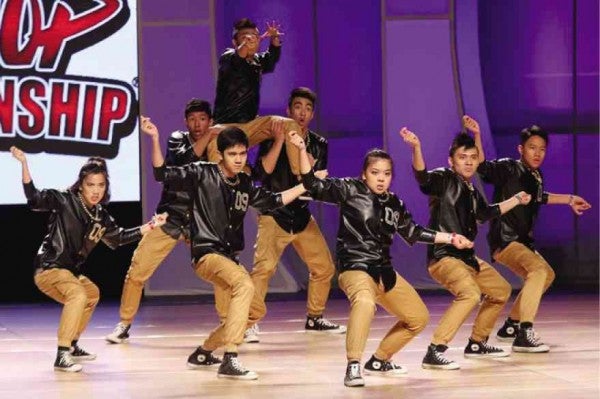 FLIPPIN’, poppin’ and lockin’, three Filipino dance troupes set the stage ablaze and finished among the top in the finals of what was dubbed “The Olympics of Hip-Hop.”

Delivering high-octane and intricately-choreographed routines, the Philippine delegation brought the house down and placed in three of the four categories of the recent World Hip-Hop Dance Championships at the San Diego State University’s Viejas Arena in California.

A-Team, the defending champion in the mega crew division, was third this time around.

Although they did not bag the top prizes, the dancers were proud of the way they performed in the international contest, which reportedly gathered some 3,000 dancers from over 50 countries.

“They were happy; they worked very hard for months,” Eloisa Matias, mother of Legit Status member Race, told the Inquirer. “They aimed for gold and came very close to getting it. They were thankful and felt blessed.”

On its official Twitter account, Legit Status—whose full crew also competed in mega crew, finishing fifth—congratulated fellow Filipino competitors. “What an honor it was to have shared the stage with such talent!” it said.

They received 8.28 points, only 0.05 points below the winner’s, The Bradas from New Zealand. In third place was India’s Kings United with 8.11 points.

For A-Team cofounder and codirector Michael Arda, finishing third “never felt so good,” especially since they were part of what he believed was the toughest, most stacked competition lineup in his dancing career.

“We can be proud of all… the accomplishments made. But, at the end of the day, it will always be about the journey and not the destination. I must say, this one is truly a journey to be thankful for,” he posted on his personal Instagram account.

“Shout out to every single soul that supported and prayed for us—you made us feel invincible,” added Arda.

Congratulating his “kids,” he said, “You know how much I love you, I’m just so proud of each one of you for coming out strong and facing the giants head-on. We all know that these moments will make us better individuals… Truly an amazing moment seeing you guys grow—I already won.”

Other Filipino ensembles that made it to the finals were the La Salle Dance Company-Street (fourth place, mega crew) and Rockstars (eighth place, adult).

Force to reckon with

Eloisa Matias said the Philippines’ achievements in the competition showed that the country was now a force to reckon with in hip-hop dancing.

“They danced on the world stage and are now considered among the world’s best. It’s an honor for them to have that recognition,” she said, adding that the camaraderie among the teams was commendable.

Read Next
Teen Choice wins for One Direction, ‘Furious 7’
EDITORS' PICK
Gilas out to prove Korea win not a fluke; Tab fires back at ‘lucky shot’ remark
Smart brings KCON:TACT especially 4U to subscribers from June 19 to 27
Smart celebrates all kinds of ‘#SimplyLove’ for Pride Month
SWS: Over 12M Filipinos still jobless as of May 2021
Brazil set to pass half a million COVID-19 deaths
WATCH: INQside Look with Fil-Am actress Aina Dumlao
MOST READ
Underdog Dasmariñas vows to fight to the death vs Inoue
PH internet speed middle of the pack worldwide – DICT
Knowing what drives China in SCS
Kai Sotto, Angelo Koaume lead Gilas roster anew for Korea rematch
Don't miss out on the latest news and information.