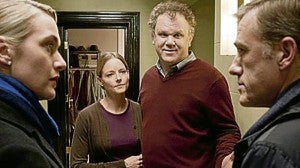 LOS ANGELES—Fresh from her well-received performance on HBO’s “Mildred Pierce,” Kate Winslet has wrapped up work on “Carnage.” The buzz is promising—the film has already snagged an early slot in the coming Venice Film Festival.

The film, a much-anticipated adaptation of Yasmina Reza’s acclaimed play, “God of Carnage,” offers a treat—Kate pitting talents with Jodie Foster, Christoph Waltz and John C. Reilly, under the direction of Roman Polanski.

Yasmina cowrote with Roman the screenplay adaptation of the Tony- and Olivier-winning play about two sets of parents who agree to meet cordially after their sons get into a fight.

As The New York Times’ Ben Brantley wrote in his review of the Broadway production, the amiable meeting turns into a “cathartic release of watching other people’s marriages go boom” and “a study in the tension between civilized surface and savage instinct.” The play is on an extended run until May 29 at LA’s Ahmanson Theatre.

Kate brought her two children (one each from her ex-husbands, Sam Mendes and Jim Threapleton, both directors) for the three-month shoot in Paris, where Roman is living in exile. The filmmaker is still facing decades-old sexual assault charges in the US.

The French location gave one more reason for Kate to admire Jodie. “She is fluent in French,” Kate said in an interview. “It’s freaky to hear her speaking French, because you just wouldn’t know she’s an American. She hosted the Caesars (the French equivalent of the Oscars). It’s extraordinary! The woman is brilliant.”

“Working with Jodie has been such a pleasure,” Kate continued. “We work in very similar ways. We’re both very quick-thinking. Obviously, she’s been doing this longer than any of us. But, because I did start when I was fairly young, too, I know what they’re doing when they’re moving a camera from here to there. I can understand how things are cut together. And, because she’s also a director, Jodie takes in those things subconsciously.”

Kate said, “Whenever any of us would feel confused about how a scene was being shot, or what it was that was going to happen next, we’d always say, ‘Jodie, what are we doing?’ She’d say, ‘Okay, here’s what they’re going to do now… But, that might not cut together, so Roman will probably shoot it in two ways.’”

The actress-director is “very warm, really funny,” according to the “Titanic” star. “We were very fortunate that the four of us got along so well. It’s a very supportive team, thank God.”

Of her director, Kate said, “Roman is one of the most extraordinary men I’ve ever met. The guy is 77 years old. He has an effervescent quality to him. He’s very joyful about his work, which is infectious. He likes to have a small crew, to the point that, when I walked on the set, my thought was, ‘My God, this is it?’”

The award-winning actress, known for her roles in such films as “The Reader” and “Revolutionary Road,” said, “None of the actors knew what to expect. How was he going to shoot this, how were we going to rehearse, and what was going to happen? We rehearsed it like a play. We learned and staged the whole thing for two weeks, then we started to film it. We started in the beginning, and we went through the entire movie in ruthless story order—which was fantastic!”

On the controversial status of Roman, Kate answered, “I certainly would shy away from talking about Roman on that aspect. That wouldn’t be sensible. Artists are artists, and things happen to them in life. Sometimes, the public forms opinions about these people. But, it’s important to remember that the work they do is what makes them the artists they are.”

Complimented on the accolades she received in the Todd Haynes-directed “Mildred Pierce” TV miniseries, Kate was asked if she saw the 1945 movie version starring Joan Crawford, who won an Oscar in the role of a mother and businesswoman during the Great Depression. “Crawford is extraordinary in the original,” she replied. “I only saw five minutes of it. I did that deliberately because Todd said to me, ‘You can absolutely watch the movie. I don’t think that you need to, but I will support whichever choice you make.’

Kate continued, “I watched the first five minutes, and I could see how extraordinary she was. Then, I thought it would probably be better for me not to watch the rest, rather than run the risk of panicking that I might not be able to give something as powerful as her performance.”

She decided to be “true to the Mildred that Todd had in mind and that character James M. Cain created in the book, which I feel is quite different from the original film. It’s a very different story, so I separated the two. I made Mildred whom I believed her to be.”