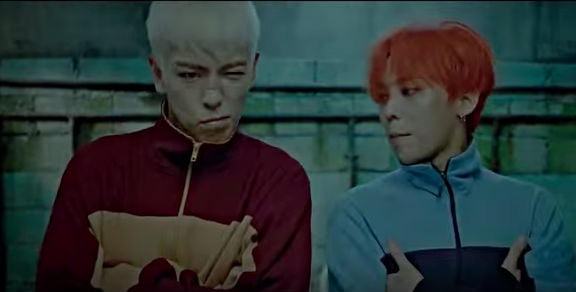 TOP (left) and GD in a scene from “Zutter” MV. Screengrab from Big Bang’s Youtube Channel

Big Bang has made several waves this summer with each monthly release from its latest album “M.A.D.E,” but it seems the group has been saving the best for last.

The two songs unleashed in the fourth and final EP “E” — “Zutter” by subunit GD&TOP and “Let’s Not Fall in Love” — and their respective music videos feature at once some of the most disturbing and the most emotionally resounding work the revered boy band has showcased so far.

In the R-rated clip for the trappy hip-hop beat “Zutter,” G-Dragon and T.O.P explore the art of the grotesque, the unapologetic dissipation of the “thug life,” and the swaggering self-praise typical to hip-hop — but with a tone of self-ridicule.

In the video, the boisterous duo adopt roles as low-life hustlers, thriving in the streets and reveling in the grimy excess of easy money.

Against the backdrop of a grungy and heavily saturated scenery is held a feast of the basest pleasures, with G-Dragon and T.O.P devouring burgers while squatting in alleyways and relieving themselves all over the walls — almost as if marking their territory.

In one particularly unsettling scene, T.O.P ferociously rips out what looks like the intestines of an animal carcass, with color-distorted green blood splattering all over the place.

But this outright wantonness suggests that the GD&TOP are not in reverence of themselves, but are aware they are participating in a time-worn hip-hop tradition of unreasoning self-assertion and the debauchery that follows success.

Lyrics like “I’ve been fat in my youth / So I know the taste of money” and “I’m drunk on alcohol / They tell me it’s art,” also hint at an underlying sense of self-deprecation and some carefully repaired chips on their shoulders.

In striking contrast with “Zutter” is “Let’s Not Fall in Love,” a mellow, pop-rock tune perhaps most similar in style to the 2011 track “Blue.”

The pastel-colored, dreamlike video features the five members running around a hazily-lit school courtyard, each taking on the role of boyfriend to five different models.

The youthful, airy atmosphere and the boys’ acting are well-captured on screen; the chemistry is tangible as each member playfully romps around with his love interest. Fans will no doubt swoon over T.O.P’s boyish smile and, most of all, G-Dragon’s vulnerable gaze.

But the group does more than just deliver to fangirls’ fantasies. “Let’s Not Fall in Love” manages to capture the subtle insecurities of teenage love — both lyrically and sonically — with acute sensitivity.

The lyrics speak of a young, hesitant romance that is ultimately more self-centered and defensive than caring. “Selfish bastard,” whispers a female voice near the end of the song.

This persona of the sensitive but wild, adolescent-like rebel is one that has frequently been adopted by Big Bang, and G-Dragon in particular — it largely colors his 2012 “Coup d’Etat” LP.

With “Let’s Not Fall in Love” — arguably one of the most heartfelt and honest tracks the group has released so far — Big Bang has struck a genuine and elusive emotional chord.