Erik and Angeline: Not yet a couple, but special friends | Inquirer Entertainment
Close
menu
search

Erik and Angeline: Not yet a couple, but special friends

Rumored sweethearts will headline a ‘no-frills’ concert at the Big Dome
By: Allan Policarpio - Reporter
Philippine Daily Inquirer / 12:08 AM August 04, 2015 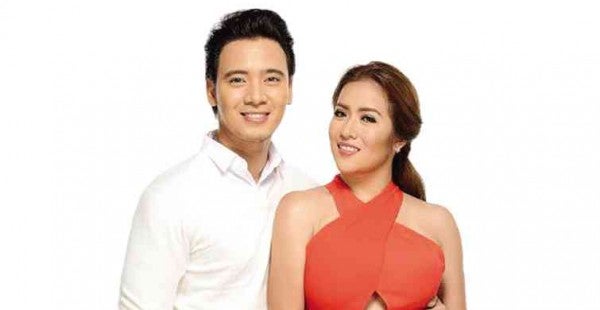 While Erik Santos and Angeline Quinto consider each other “special,” the two singers insisted that they’re not yet a couple, saying that they would rather take things slow for now.

“We know what we have and are very comfortable with each other’s company. I’m not in a rush and I don’t want to preempt anything,” Angeline said during a press conference for her and Erik’s concert titled “KQ at the Araneta Coliseum” on Aug. 15.

“He understands whatever personal reasons I may have on why I’m not yet ready to commit,” added Angeline, who rose to fame after topping the reality talent search “Star Power” in 2011. “I hope he can wait.”

Erik, also a singing competition alum, echoed his rumored sweetheart’s sentiments. “We’re happy when we’re together and enjoy ourselves. But we don’t want to force it… In any case, we’ll let the public know if things become official,” related the “Star in Million” Season One champion.

As for the concert at the Big Dome, Angeline said that it’s something she’s been dreaming of since she was a young, aspiring performer.

“I can’t describe how I feel. I feel so blessed to be entrusted with a big project such as this one,” she said, adding that she’s been asking for tips and support from her more experienced partner.

“We’ve been in a couple shows—regional and abroad. Lots of people have been suggesting that we headline a major concert together, since we have good chemistry,” said Erik, who described the Big Dome show as “no frills.”

“There won’t be any fancy stage gimmicks or effects. It will be purely about the music. We selected the songs carefully and made sure that they will have wonderful arrangements,” he said.

Erik and Angeline have been dubbed by their supporters as the “King and Queen of Theme Songs,” because of the number of tunes they’ve recorded for either films or drama series: Erik has 37; Angeline, 35. “We’ll be performing some of our favorites, but of course, the repertoire won’t be limited to that,” Erik said.

Also gracing the show are Regine Velasquez-Alcasid and Martin Nievera. “While I’ve sung with them a few times already, I still get nervous,” Angeline admitted. “That’s why I’ve been practicing really hard so I wouldn’t be left behind.”

Read Next
Bee Gees Gold tribute brings back disco fever
EDITORS' PICK
Tired of your Wi-Fi signal problems at home? Here’s a solution!
POVA x Mobile Legends Bang Bang: A partnership that’s built to win
Infants bundled off; no one hurt in PGH fire
OPINION: Mischief Reef – where it all started
Must-know scams to avoid when buying cars
Fire-damaged PGH calls for donations
MOST READ
Leonen impeachment case moves forward in House
Hot, humid weather for PH on Monday — Pagasa
Mischief Reef – where it all started
Woman believed to be dead wakes up minutes before her cremation
Don't miss out on the latest news and information.