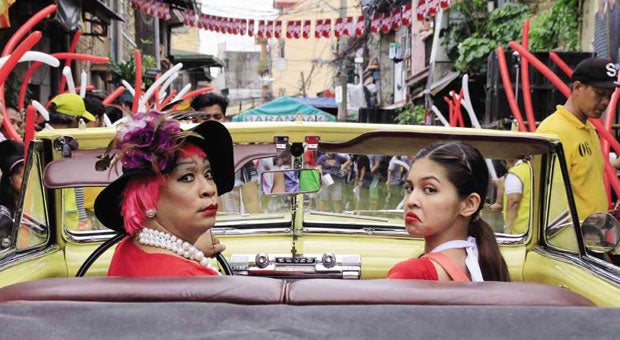 MAINE Mendoza, aka Yaya Dub, got nervous on her first day of work with Lola Nidora, or Wally Bayola (left) in drag. photo: EBDABARKADS FACEBOOK

If fate didn’t intervene, Nicomaine Dei “Maine” Mendoza would have been a stewardess by now.

Instead of flying high, she found herself grounded, visiting barangays near and far for the “Juan for All/All for Juan” portion of “Eat Bulaga,” playing the role of Divina Ursula Bokbokova or simply Yaya Dub, the kooky nanny of Lola Nidora (or Wally Bayola in drag).

Quite fittingly, the staff of the GMA 7 noontime show found Mendoza on Facebook.

After all, Mendoza first made waves online, with Dubsmash, a mobile app used to create selfie videos.

She was dubbed the “Queen of Dubsmash” for her irreverent impersonations—particularly of TV host Kris Aquino—on YouTube.

Mendoza told the Inquirer that she never imagined Dubsmash would be her ticket to mainstream celebrity. “I didn’t think I’d get offers to appear on TV shows … people must have really enjoyed my videos.”

Her own family and friends were pleasantly shocked by her new job. “Every day, they wait for our portion. They are proud and happy because I was able to make my ‘secret’ dream come true.”

Only 20 years young, Mendoza never dared pursue show biz as a teener. “I was afraid people would laugh at or poke fun of me if they found out I wanted to be an artista.”

“I initially planned to upload just a single compilation of my Dubsmash videos. But when I realized that people were really entertained, I was encouraged to do more,” she recalled. “I was doing it for fun; why not share the laughter and happiness with everyone?”

She acknowledged the crucial role played by Dubsmash in her booming career. “I am where I am right now because of Dubsmash.” Still, she is keenly aware of the perks and perils of cyberspace.

“Social media has become an intrinsic part of teenaged life,” she explained. “We can learn a lot from social media, but there is also a down side. We can find almost everything online, but there are also things that are not suitable for young people. We should always be careful of the information we get

online—whether we should believe it or not.” 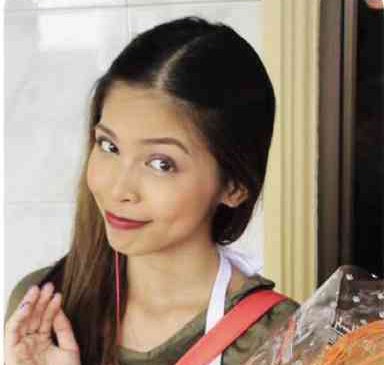 Mendoza graduated with a degree in Hotel, Restaurant and Institution Management at De La Salle-College of Saint Benilde last February. She recounted that she majored in culinary arts because she wanted to learn how to cook. (She underwent a six-month internship program as a cook at The Sagamore Resort in Bolton Landing, New York.)

Instead of a chef’s toque, the fresh graduate was eyeing a flight attendant’s uniform when “Eat Bulaga” beckoned.

She has yet to meet the show’s main hosts Tito, Vic and Joey since she is often on location with Jose Manalo, Paolo Ballesteros and Bayola. “I get anxious every time I think about coming face to face with TVJ.”

On her first day of work, she was a nervous wreck. “Jose, Paolo and Wally were easy to get along with, but I sometimes get tense in front of them because they are some of the finest comedians of our time.”

Being an FA would have to wait since she has become more at home in the biz.

“I want to try acting in movies and teleseryes and experience everything show business has to offer,” she quipped. “I just hope I have what it takes. I also want to move on from Yaya Dub and create other characters. But of course Yaya Dub will always be a part of me because that was how I got my start.”

Yaya Dub was also instrumental in landing her first ka-loveteam: Kapuso heartthrob Alden Richards whom she has yet to meet at presstime.

“I am really looking forward to meet Alden and do the ‘pabebe’ wave in front of him,” she owned up. “I am actually worried about how I would react when I finally see him in person. Hashtag ‘kiligpamore.’”

The budding AlDub tandem caught her by surprise. “I didn’t see it coming. Like love, it just happened. It was unplanned. Maybe people sensed we had chemistry … science ’yun ha!”