The throat-busting heartbreak rock anthems of the OPM band Aegis have always been a staple in local watering holes or in drunken karaoke sessions at home. The group’s songs gained even more popularity when they were used in the acclaimed musical “Rak of Aegis.”

However, it’s quite surprising to learn that in its 17 years of performing and going on tours here and abroad, the seven-member 1990s pop act has yet to hold a proper concert in Manila. “The shows are only happening now that Aegis has aged,” lead vocalist Juliet Sunot said in jest in a recent chat with the Inquirer.

Aegis—also composed of Juliet’s sisters Mercy and Ken Sunot (vocals), Stella Pabico (keyboards), Vilma Goloviogo (drums), Weng Adriano (bass) and Rey Abenoja (guitar)—will take the stage at Music Museum on July 23 and 24 for “Back in the City,” which will be directed by Jay Durias of the pop-R&B band South Border.

“I guess it took this long because we’re always out of the country. We’ve done shows in the United States, Asia and Europe. It’s just now that we’re starting to get really noticed… and for the first time, a producer gambled on us for such a big project,” Juliet related.

Juliet, known for her raspy yet soaring vocals, confessed that interviews make her a tad nervous. “I’d rather sing,” she quipped, adding that she and her bandmates have been feeling the pressure now that the concert is just a couple of days away.

“We’re wondering if we could fill the venue. This is also different from the usual gigs we do. We’re used to doing simple numbers and arrangements, but our coming show is more elaborate. Our keyboardist’s hand froze one time during rehearsals because she had to play too many notes,” Juliet said, laughing.

Asked what kind of repertoire they will dish out, Juliet said they will do covers of 1970s and ’80s ditties and, of course, their own well-loved hits, including “Halik,” “Luha” and “Basang-Basa sa Ulan.” “We’ll also dance,” Juliet added. “Now that’s a challenge!”

That Aegis’ music inspired a local theater production is a vindication of sorts for the band, which, especially in its early days, was readily dismissed as being bakya (cheap). But through “Rak of Aegis,” the audience, especially the younger generation, has developed a newfound appreciation for the group’s music. 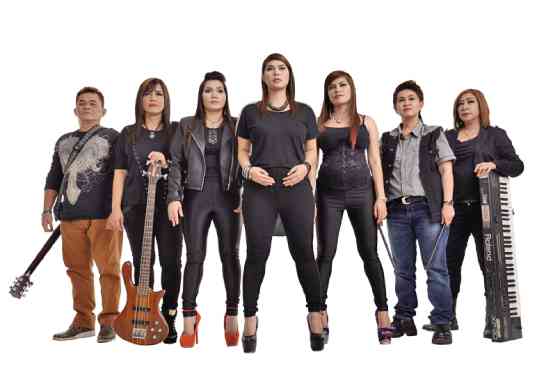 AFTER 17 years in the biz, Aegis will finally headline a proper concert in Manila.

“I think ‘Rak of Aegis’ definitely boosted our popularity. Eh ’di wow,” Juliet said, drawing laughs from the rest of the group. “Seriously, I don’t know what to say. I can’t describe my feelings… I’m speechless,” said the singer, who takes care of her voice by having enough sleep and avoiding drinking anything cold. “Sometimes I melt the ice cream just so I could taste it!”

Aegis has so far released 10 records, including a Christmas album and two compilations. While the band members would love to come out with new material soon, Mercy said they would rather take things slow. One thing’s for sure, though: It will still have that classic and catchy Aegis sound.

“We’ll stick to what we do, because that’s what made the people like us,” Mercy pointed out. “I think our songs have recall and are very relatable, whether it’s about love or struggles in life.”

After the shows, Juliet said the band will return to its regular grind and continue performing as long as they can. “I’m grateful for what we have. We just keep going, especially since nothing is permanent in this business,” Juliet said.

“Aegis Back in the City” is mounted by Outbox Media Powerhouse Corporation. Guests include Daryl Ong and Leah Patricio of “The Voice of the Philippines” Season 2 and K Brosas. For tickets, call 7034239 or 3322197.