One Direction’s Louis Tomlinson to be father–reports 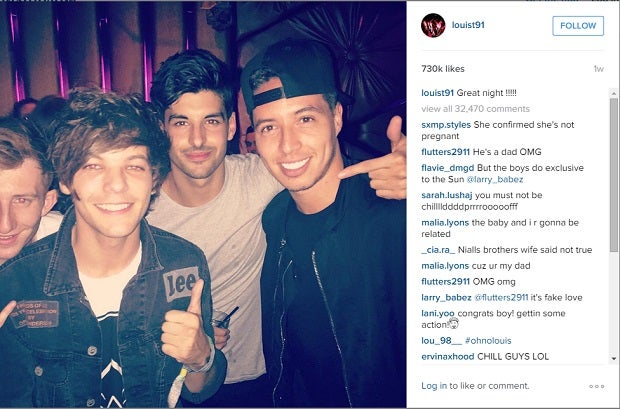 Fans and social media followers of One Direction Louis Tomlinson (left, foreground) react to reports that he is having a child with ‘friend’ Los Angeles stylist Briana Jungwirth. INSTAGRAM SCREENGRAB

NEW YORK, United States – One Direction heartthrob Louis Tomlinson is set to become a father, reports said Tuesday, in the latest jolt for the boy band once known for its squeaky-clean image.

The 23-year-old, who would be the first dad in One Direction, is expecting a child with Los Angeles stylist Briana Jungwirth, according to British tabloid The Sun and US celebrity magazine People.

The Sun – which ran the headline “One Conception” – said that Tomlinson went on dates with Jungwirth in May after breaking up with girlfriend of four years Eleanor Calder.

People magazine said that Tomlinson – whose British band has vowed not to split up after a recent feud – was looking for properties in Los Angeles.

A representative for the band did not immediately comment. Tomlinson last posted on Twitter a day earlier to raise support for a children’s charity.

One Direction stormed onto the scene in 2010 when the young men appeared on the British talent show “The X Factor.”

Beginning in 2011, the group has released an album of crowd-pleasing pop each year before the year-end holidays, selling more than 50 million records worldwide.