Duterte tells Vice Ganda: I used to be gay but I was reformed 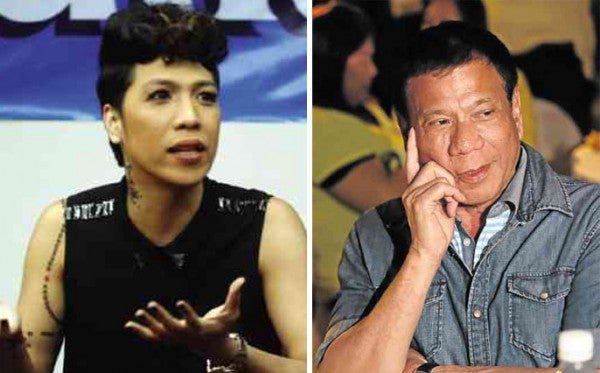 “Bakla ako noon, na-reform lang. (I used to be gay but I was reformed).”

Though spoken in jest, the tough-talking, macho Davao City Mayor Rodrigo Duterte delighted millions of Filipinos again on Sunday when he showed his soft side with the help of the proudly, flamboyantly gay TV personality and comedian Vice Ganda.

In a taped episode of the late-night talk show “Gandang Gabi Vice,” Duterte talked about his political and personal life and even grooved along dance crazes.

Answering candidly no-holds-barred questions thrown by Vice Ganda, Duterte reiterated he is not running for President in next year’s elections. “I am not interested in the presidency. It doesn’t appeal to me.”

When asked about who he’s not going to vote among Interior Secretary Mar Roxas, Sen. Grace Poe and Vice President Jejomar Binay (who Duterte called “good” after the names were said), he said: “Kaibigan ko silang lahat. I won’t say ‘good,’ if they are not good.”

“I’d rather not state it publicly, baka sumama loob nila saken (they might feel bad and take it against me),” he added.

Vice Ganda enumerated again the three names, this time saying “Rodrigo Duterte” as the fourth on the list. “Very good!” the mayor exclaimed.

The host at one point also ecstatically commended the mayor for answering the questions point-blank and without any hesitation. “We’ll stick with the truth,” Duterte said.

Now that he is annulled with his first wife Elizabeth Zimmerman, with whom he had children, Duterte said he’s had one wife and three girlfriends.

“Alam nilang sabay sabay silang lahat? (They didn’t know they’re having relationship with you all at the same time?)” asked Vice.

Having been open about his relationship with other women, he said he would die if he doesn’t have any in his life, setting no standards when it comes to looking for one.

But in terms of love and relationships, he said “nothing will last forever.”

“I don’t want to get to a quarrel with the ladies, he said.

“They’re all my friends,” he added in Filipino.

“This person in the center (referring to De Lima), she seems to be looking at me intently,” Duterte said.

Duterte recently earned the ire of De Lima and Rosales for his iron-fist approach on dealing with criminals. “Kill them all,” Duterte was quoted in a TV program.

Since college, Duterte said he doesn’t want gays to be bullied, saying he “has always hated oppression.”

Duterte also quipped he used to act gay before. “Para ang mga babae hindi matakot sa kin, para lalapit sila (So that women won’t be afraid of me and they will come to me).”

He said if his son turned out to be gay, he will accept it. “It’s more of the human dignity than anything else. All human beings are created by God. So reresputuhun mo yung totoong babae o toong lalaki. At kung ito namang isa ay medyo alanganin (You will respect the real women or real men. And if this one is somewhat in the middle)…then he is also a creation of God.

“Mag-respetuhan tayo. Sa Davao walang binabastos na bading (Let us respect each other. In Davao, there’s no gay being ridiculed),” he added.

Asked about his view on same sex marriage, the mayor said: “Everyone deserves to be happy.”

Not forgetting the chance to show his talent, Duterte endeared the audience by singing his favorite song “Ikaw” by Sharon Cuneta.

He also proved he got the moves when he strutted along today’s dance hits “Watch Me (Whip/Nae Nae)” and “Twerk it Like Miley.”

The hashtag #DuterteOnGGV became the hottest trending topic on Twitter all over the country and worldwide.

Duterte has been a staunch supporter of LGBT rights. In 2009, he condemned the Commission on Elections when it rejected the application of gay rights group Ang Ladlad to participate in Philippine politics through the party-list system.

“I was the first to say [to them], ‘Stop this hypocrisy!’ Kasi sila mayroon ding bakla sa opisina nila eh (There are gays in their offices),” he said to Vice.

Only Duterte can beat Binay

Cayetano dares Velasco to probe Phisgoc: Put me in jail if you find anomalies

‘They are making up stories’: Cayetano camp denies insulting Velasco before Duterte

No intent to shut down Facebook, Duterte only wants to talk – Palace