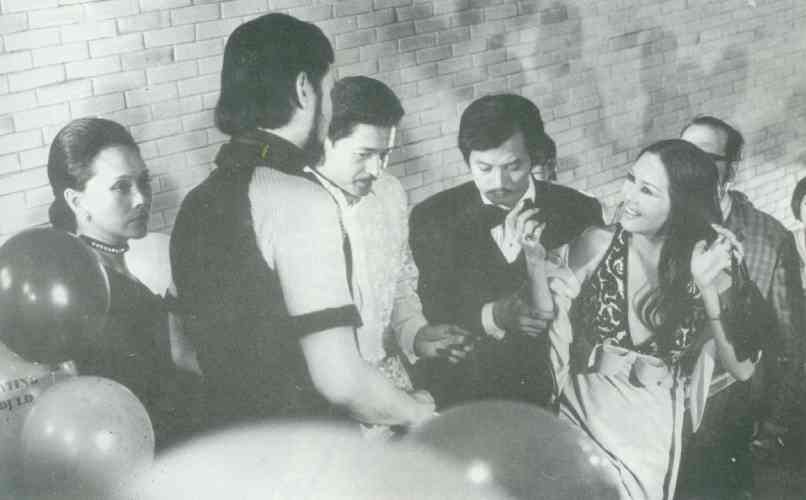 EARLY LAST week, I was looking for an old script, but instead discovered a cache of photos of “Two for the Road” and the late, great Elvira Manahan. The discovery, specifically on her birthday month, “told” me something—and brought back many indelible memories.

Immediately, I sat down to write this fond remembrance of my dear, beautiful and iconic friend and idiosyncratic cohost, who left us most suddenly way back in 1986—but will never be forgotten.

How to pay tribute to her in a way that will make her accessible and empathetic to an entire generation of viewers and readers who were born after her tragic exit? Perhaps this sheaf of “found” photographs will help bridge the wide divide:

“Two for the Road” shots show “ELM” featuring our “Magsimula Ka” singers on “TFTR.”—Elvira was very supportive of young artists and helped them whenever she could! Isay Alvarez and Gigi Posadas still remember being gifted with all sorts of beautifying products that enhanced their performances, while Jograd dela Torre was given a boost by Elvira’s niece, Kuh Ledesma, with front-act performances in her concerts both here and abroad.

Since I was a theater person, Elvira very generously agreed to use our show to give local theater productions a big promo boost by featuring excerpts from them, performed by then still stars-in-the-making like Cynthia Patag and the late Ric Segreto.

During Martial Law, our “sosyal” show “dared” to feature activists, quickly eliciting the displeasure of the regime, which finally instructed the Board of Censors to dis-allow us to telecast live, so that our show could be vetted for “radical” content.

But Elvira, director Maria V. Montelibano and I stood our ground and after a five-hour meeting with the censors, at which our lawyers included Joker Arroyo—the censors blinked, and we were permitted to telecast live again!

This “engaged” chapter in the telecasting history of “TFTR” was supported by friends like Behn Cervantes and George Sison, and showed that ELM was far from her cliché image of the ditzy socialite.

More personally, I benefited a lot from ELM’s friendship, which deepened during our taping tours abroad, to Vancouver and elsewhere, and our private trips, especially our three-week sojourn through Italy—the highlight of which was our opportunity to meet now St. John Paul II, a priceless experience that reduced the glamorous Elvira to a prayerful child!

Other photos vivify the other facets to ELM’s sometimes contradictory public and private personas, like her movie roles and (hush-hush) charitable advocacies. But, her friends saw no contradictions at all, and loved her for the prismatic and unique individual she was.

—More than two decades after her abrupt departure, we value, cherish and love her still!