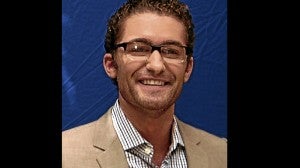 LOS ANGELES – A new character will try to steal Blaine (Darren Criss) away from Kurt (Chris Colfer); Sue (Jane Lynch) will run for Congress, and Will (Matthew Morrison) will prove he has, um, “man marbles.”

“Glee’s” Chris, Jane and Matthew revealed these storyline developments and more when we interviewed them recently.

Jane and Matthew were paired together. Here’s a sample of their banter, which displays their close friendship:

Matthew: I’m very excited about Will Schuester this season, moreso than I’ve ever been in any other season, because I have greater gravitas this year.

Jane: I wrote a little bit about our friendship in my book (“Happy Accidents”) –about how much I love Matt and that he’s the best part of coming to work.

M: I cried when I read what she wrote about me in the book. I was so emotional. I would say my most enjoyable time coming to work is when I get to do a scene with Jane.

J: He’s so great with my daughter. He’s like, ‘Can I take her to the movies?’ I said, ‘You absolutely can.’ He came to my wedding party in California.

Jane admitted that, early in her acting career, she was as antagonistic as her track-suit-wearing character.

“I was afraid that the parade was going to pass me by. I was very critical. This was when I was doing crappy theater in Chicago. It was a phase I went through. I have much more equanimity about it now.”

The recent Emmy Awards host shared what followers of the series can expect from the conniving Sue: “I’m excited about the season because they’ve given me a wider focus for my anger, which is the world. I’m running for Congress. I’m still splitting back at the Glee Club. We’ll be revealing some interesting things about what happened to Sue as a younger person that I’m so excited about.”

Jane disclosed, “Sue Sylvester is running for office under the American Liberty Party. Sue’s platform changes every episode to suit her needs. Right now, it’s anti-arts and pro-math and -science. Something is going to knock her, and we’re going to see a little more of that vulnerability.”

Asked if she gets tired of Sue’s crankiness, Jane answered, “No, I love it. I eat it up. I think she’s so angry because she was protecting her sister with the Down Syndrome for so long.”

Matthew, whose Will character is often seen as the New Directions coach but he’s actually also McKinley High’s Spanish teacher, said that he is grateful to a mentor in his student days at the Orange County High School of the Arts.

“One of my high-school mentors, Dr. Ralph Opacic, sat me down in my junior year, because I was on the borderline,” he pointed out. “I was like the Finn character (Cory Monteith). I was saying, ‘I think I just want to be in the soccer team and forget the arts.’ He said, ‘I’ve seen a lot of people go through this school. You really have something special. You should stick with it.’ And I did, because of that conversation. I thank him every day.”

“They have a great storyline coming up,” Chris enthused about “Glee’s” writers. “Another character comes in the picture named Sebastian (Grant Gustin) who wants to steal Blaine away from Kurt. When I first read it, I was a little disappointed because I was like, ‘Why does nobody love me?’ But, you get to see Kurt in a very territorial light, which is a lot of fun for me. I’m just happy that there’s finally some conflict with them, because they’ve been in a puppy-dog love state for a while.”

On the scene in which Kurt surprises Blaine with a bunch of roses (preceding the “West Side Story” casting announcement that Kurt lost the Tony role to Blaine), Kurt admitted with a smile, “When I read the script, the very competitive theater kid in me thought, ‘Oh, those flowers are poisoned! Kurt is poisoning Blaine. He wants the role that bad. But, no, it was Kurt’s gesture saying, ‘The role is yours and you deserve it.’”

“Darren is great,” Chris said of the Filipino-American actor. “He takes everything very seriously. Darren is always so enthusiastic on the set about everything.”

Chris added, “I can’t tell you how many girls are mad at me that I’m with Darren Criss on TV. Gosh, the hate letters!”

The actor admitted that he was “pretty cutthroat” in his community theater and school-play days. “I was so competitive,” he bared. “It’s so funny because, even though I was a very insecure kid, I had a drive like no one else’s.”

Talk about those days led to his reminiscences about being bullied. “When I was growing up in high school, being gay was the absolutely worst thing you could ever possibly be,” he recalled. “It was really like being on the bottom of the food chain.”

He added, “I was homeschooled for half of seventh grade and eighth grade, because I was bullied so much in school. My locker kept getting broken into. I never realized when I said that I was bullied that it would become such a huge thing.” Chris is glad that speaking up about being bullied has inspired public dialogue about the issue.

On a lighter note, Chris was asked if he has met Elton John who was moved by his acceptance speech when he won the Golden Globe Best Supporting Actor for TV early this year. Chris said, “Elton invited me to his Oscar night dinner. I sat right next to him. We were gossiping all night. It was so much fun! He might come on the show soon, I hope.”

Laughing, Chris quipped, “Elton could play my English uncle who plays the piano.”