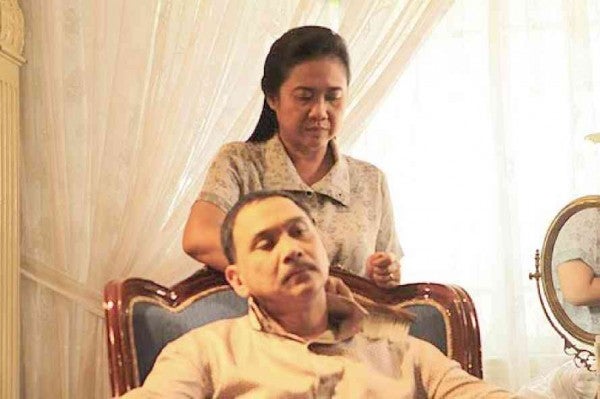 Nonie Buencamino (foreground) appears in this scene from the movie ‘Barber’s Tales.’ Buencamino has issued a waiver to dispense of a formal police investigation on the death of his daughter, Julia Louise. Behind Buencamino is actress Eugene Domingo. INQUIRER FILE PHOTO

Buencamino, 49, has “executed a written waiver manifesting not to pursue the investigation as they fully believed that their daughter committed suicide,” said Police Officer 2 Virgilio Mendoza of the Criminal Investigation and Detection Unit of the Quezon City Police District.

Julia Louise, the youngest of Buencamino’s four children with actress Shamaine Buencamino, was found hanging from the ceiling of her bedroom’s bathroom at about 8:20 p.m., Tuesday, according to a report of case investigator Victorio Guerrero.

Probers said the girl was found by their household help Elsa Orsales. A “nylon rope was looped around her neck,” they noted.

Orsales reportedly sought help of the victim’s brother, Gregorio Martin, 22, who rushed Julia from their house in Corinthian Gardens to the Cardinal Santos Medical Center in San Juan City, where she was declared dead on arrival at 8:46 p.m.

Police said that while Buencamino and his family “fully believed” that his daughter killed herself, they had yet to establish that her death as a suicide.

Julia was part of ABS-CBN’s daytime series “O My G!”

Amid the report of Julia’s death, a private foundation concerned about the effects of depression on people is offering help, especially to those having suicidal tendencies.

Established in 2007, the Natasha Goulbourn Foundation (NGF) said its counselors were ready to listen to those battling depression or feeling suicidal.