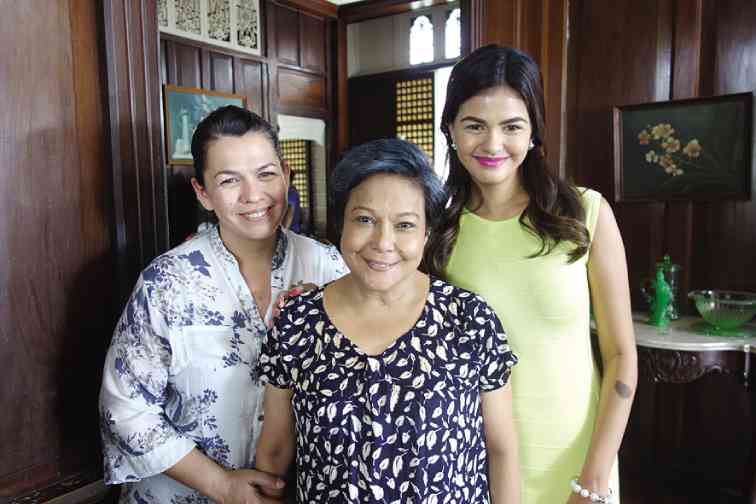 Making it sweeter for the Superstar, as Nora is known the biz, was the inclusion of Lotlot’s daughter, Janine Gutierrez, in the television gig, the July 11 episode of GMA 7’s weekly drama anthology “Karelasyon,” which features true-life stories.

“I didn’t know that I would be with them, so I was very surprised and excited. It’s been a long time since I worked with Lot. Now, we even get to be with Janine who’s such a pretty girl,” Nora told the Inquirer. She added, as a joke: “Mana sa ’kin! (She took after me!)”

Nora wished that this get-together could’ve happened earlier, but there was no opportunity. “Well, you can’t dictate what kind of acting projects you will get. I believe that this is the best time for everyone,” said Nora.

In this showcase, Nora plays Maring, a comfort woman during the Japanese occupation. She hid her harrowing past from her family, but was forced to reveal her secret, after her granddaughter, Rose (Janine), returns home from Japan—where she worked as an entertainer—with a Japanese fiancé.

Lotlot said of the reunion, “It’s a rare moment for us…It’s not every day that we get to be in one show.” Lotlot also got to share the screen with Janine for the first time.

Lotlot admitted that it can be intimidating acting with the Superstar. “I’m on my toes when I work with her. She’s a great talent, so I want to at least match her intensity,” Lotlot pointed out.

If Lotlot felt pressured, what more Janine, who’s a relative newbie in the biz?

“I’ve seen some of her movies and I know that she’s really good,” the 25-year-old celeb said of Nora. “I hope to have a long talk with her and ask for tips, hear her stories and learn from her experience. I’m in awe that she still finds new roles to play in the movies and TV.”

Asked what piece of advice Nora would give to her granddaughter, the acclaimed actress said she would tell Janine not to lose her passion for the craft. “You won’t go wrong with that,” she said. “But I can say that Janine is promising. She’s beautiful, too. She’ll beat me and Lot someday!”

She continued: “There was no awkwardness on the set because we’re all comfortable with each other. I can give them advice if they ask for it; I can talk to them and impart what I’ve learned through the years.”

The three ladies have director Adolfo Alix Jr. to thank for making the project possible. “When we read the script, I thought it would be perfect to cast them. We really tried hard to fix their schedules,” he said.

After “Karelasyon,” Nora and Adolfo will continue to collaborate. They plan to fly to the Netherlands to do a film tentatively titled “Eskaparate,” about an aging prostitute in Amsterdam, and “Tasaday,” which focuses on the plight of the controversial tribe.

“Adolf is one of my favorite directors…He’s kind and great at what he does,” Nora said of the filmmaker, who also directed her in two coming indie films, “Padre de Familia” and “Whistleblower.”

Meanwhile, the 62-year-old actress continues to receive lifetime achievement recognitions left and right, the latest being the Diwa ng Lahi award given by the City of Manila. Do all these honors make her feel old? “Not really. It actually makes me feel beautiful!” she said, laughing. “Like I have so many suitors! Seriously, I’ll never get used to winning awards.”