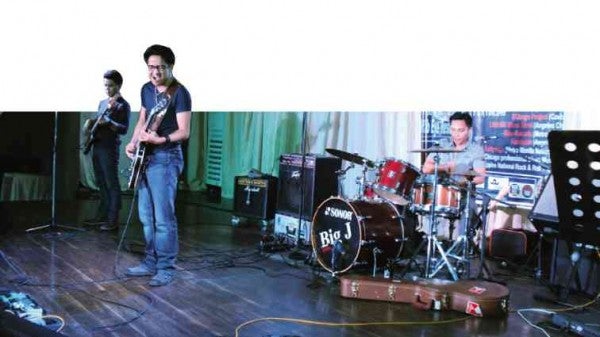 The blues has found another home in Angeles, Pampanga, with the city’s annual Blues Summit effectively establishing itself as an institution. Blues fans from all over, including a large contingent from Metro Manila, were treated to a mighty fine night of music and brotherhood at the third annual Angeles Blues Summit held at the Rib Eye Function Hall, near the city’s entertainment district.

And a summit it was, gathering together blues communities, locals and expats, as well as a truly eclectic lineup that brought a rich variety of styles and hues of the blues to the table. And, for the first time, it brought to one show Maria Cafra’s Resty Fabunan and the Bleu Rascals’ Paul Marney Leobrera—two generations of the most mesmerizing, crazy-talented blues artists on the local music scene.

Vocalist and multi-instrumentalist Thomas was a welcome addition to the program, doing several mid-tempo, soulful blues numbers “like we do it back home in Chicago—nice and slow,” before showing off what the Blue Collars and its tight horn section also had up its sleeves with a few funky, Latin-flavored tunes.

A highlight of the set was expat blues guru and veteran blues harp player Tom Colvin joining the band onstage tooting his trusty old harmonica and beaming ecstatically like a little boy who finally got his hand out of the cookie jar.

Lady High was a treat, as always, with its take on the blues anthem, “Ball ’n’ Chain,” never failing to bring the house down, although—or perhaps partly because—it never seems to play the song the exact same way every time. Longtime guitar idol Jun Lopito seemed to have a problem with a loose tuning key all night, but Johnblues de Zuñiga on second lead guitar more than made up for the slack.

Returning band D’Jango Project, this year with vocalist Michael Odoño up front, again hit it big with its bag of immortal Allman Brothers crowd favorites, including a skintight cover of “In Memory of Elizabeth Reed.” LUID MK again brought its fun, free-wheeling, hair-down feel of the blues, with firecracker vocalist Dino Dollente eliciting smiles by typically substituting “bad bulalo” with the words of the blues thumper favorite, “Bad to the Bone.”

But it was the sizzling guitar work of Paul Marney Leobrera of the Bleu Rascals and Resty Fabunan of Maria Cafra that made the night truly epic, making instant converts out of a large number of resident expats who witnessed the event. Jaws dropped anew as Paul took the entire hall through magic rides with his soulful solos as the youthful power trio reprised several blues and blues rock staples along with a few originals from their first album, including the popular “Doble Kara” and “Rollercoaster.”

At a later set, an amazingly fresh-sounding Resty Fabunan looked like he had just stepped out of a time machine, playing legendary Maria Cafra hits with style and gusto like it was just yesterday.

Woodstock generation blues freaks in the audience—and there were quite a few of them, including show host Cousin Hoagy—got to relive the heady, glory days of the early 1970s with the power trio resurrecting counterculture anthems of the era including the band’s signature hits, “Star-Spangled Banner/Purple Haze” and “Exodus.”

After all, it was the same awesome Resty Fabunan of more than four decades ago, and he probably would have lit up his old Strat, too, just to make everyone’s flashback complete.

Despite a few glitches, the summit was deemed an overwhelming success.

“Frankly, we had to turn away a number of bands who wanted to be part this third summit because of time restrictions,” explained LUID MK lead guitarist Angelo Long of the organizing outfit Angeles Blues Experience Productions Unlimited (ABE-PU).

“We’re toying with the idea of making it perhaps a two-day event next year, to accommodate more bands. We want to make it known that the blues is alive and well here, and that blues and blues-based musicians and music lovers have a home here in Angeles City,” he said.