Optical Media Board (OMB) chair Ronnie Ricketts on Friday posted bail from graft for allegedly allowing the pullout of seized pirated DVDs (digital video discs) that would have served as evidence against suspected counterfeiters in March 2010.

Dressed in a white polo and black denim pants, the actor swaggered his way to the Clerk of Court amid giggling court employees who lined up in the hallways to see the former action star.

Ricketts even passed by a group of enthusiastic canteen employees who offered to serve a meal for the actor.

He posted a P30,000-bail for one count of graft at the Sandiganbayan Fourth Division which will hear the case lodged against him by the Office of the Ombudsman.

After the booking process of recording his fingerprints, a group of Sandiganbayan security escorts asked to have a picture taken with the action star.
Wearing sunglasses to evade the glare of the cameras, Ricketts declined to be interviewed by the media.
Ricketts’ lawyer Numerio Rodriguez said the actor is confident that he will be proven innocent from the allegations against him.

“Like any ordinary individual, he was worried about it, particularly for his family. He wanted to be able to explain it adequately to his children,” Rodriguez said.

“But other than that, he’s okay. He is confident that he will get through this,” he added.

The Ombudsman said Ricketts gave undue preference to Sky High Marketing Corp. when he ordered the confiscation of pirated DVDs and VCDs (video compact discs) from the firm’s office only to have the evidence withdrawn.

On May 27, 2010, the OMB seized 127 boxes and two sacks of pirated DVDs, VCDs and a video recording human I.P.C. Its agents also arrested three Chinese nationals during the raid in Quiapo, Manila.

The seized items were brought to the OMB office in the afternoon but were pulled out in the evening of the same day without any approved gate pass and loaded onto a vehicle owned by Sky High, the investigators said. 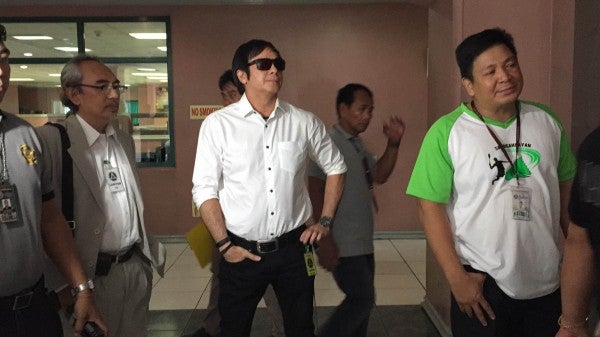