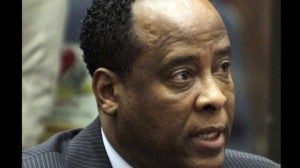 LOS ANGELES, California — Michael Jackson could not have caused his own death by self-administering a powerful sedative, the medic who carried out his autopsy said Tuesday, as a graphic photo of the star’s corpse was released.

Christopher Rogers, who examined the King of Pop’s body after his June 2009 death, said it was more likely that Jackson’s personal physician Conrad Murray mistakenly gave him too much of the drug propofol to try to help him sleep.

“The circumstances from my point of view do not support self-administration of propofol,” Rogers told the Los Angeles court as Murray’s manslaughter trial entered its third week.

Murray is accused of involuntary manslaughter by giving Jackson an overdose of propofol. His lawyers claim Jackson was a desperate addict who gave himself a fatal extra dose while Murray was out of the room.

The doctor told police, in an interview heard in court last week, that he was away from Jackson’s bed for only two minutes on June 25, 2009 to go to the bathroom, and returned to find the singer not breathing.

Rogers said that in such a short time Jackson, already heavily sedated, would not have been able to inject more propofol via an intravenous (IV) tube in his leg fast enough for it to stop his breathing before Murray returned.

“To me that scenario seems less reasonable,” Rogers told the court, adding that he believed Murray simply got the dosage of propofol wrong while trying to keep Jackson asleep.

Murray has admitted to giving Jackson 25 milligrams of the drug, a clinical anesthetic the star called “milk” to help him sleep, and would have had to give regular extra doses to keep the singer unconscious.

But Rogers noted that Murray had no accurate equipment, such as an IV pump, to check the doses being administered.

“Essentially, the doctor would be estimating how much propofol he was giving,” he said.

“I think it would be easy under those circumstances for the doctor to estimate wrong and give too much propofol.”

The testimony came as the prosecution showed a picture of Jackson’s naked corpse, with the genital area blacked out.

Rogers detailed a swathe of puncture marks in his arms and legs, where drugs had apparently been administered.

Jackson’s mother Katherine, who returned to the trial after a week’s absence while traveling — notably to a weekend tribute concert in Britain — left shortly before the graphic photo was shown.

In a gripping interview with police two days after Jackson’s death, the start of which was played in court last week, Murray gave a blow-by-blow account of the hours leading up to Jackson’s death.

In the rest of the interview, played in court after a three-day weekend break, Murray recounted how Jackson was almost blind, hardly ever ate proper food and had problems urinating, sometimes wetting himself.

Murray, hired two months before Jackson’s death to look after the star as he rehearsed for a series of comeback shows in London, told jurors how he learned that Jackson had a series of other medics prescribing drugs for him.

He went to Beverly Hills dermatologist Arnold Klein three times a week, and often emerged “wasted” after the sessions, struggling to perform at rehearsals for a string of comeback shows in London, Murray said.

Murray also told how Jackson’s children were “weeping, really weeping” when they found out their father was dead. He told the star’s daughter Paris that he had done his best.

“She said, ‘I know that Dr. Murray… I know you tried your best, but I’m really sad. You know, I will wake up in the morning and I won’t be able to see my daddy’,” he said.

The trial in Los Angeles Superior Court is expected to last five weeks, until the end of October. If Murray is convicted, he faces up to four years in jail.