“RJ guitars are on sale up to 50 percent so this is your chance,” he said on air, enumerating his string of music stores nationwide. Is it the musician or the businessman in him? Or both. Giving away guitars just like that, we wonder.

(A decade ago, he told us in an interview for a men’s magazine that his dream was to put an RJ guitar in every household as part of his advocacy to support the music-loving Filipinos.)

The night before, he played with his band and other leading rock veterans for more than two hours in what was dubbed “Icons of Pinoy Rock” concert at the Ynares Sports Center in Pasig City.

But what’s more admirable is that three days ago, June 3, he celebrated his 70th birthday.

Most people in their late 60s or early 70s we know could hardly bend down to pick a pen on the floor or carry a bag of fruits, half-paralyzed by rheumatism or gout or both. If not aided by a cane or carried by a wheelchair, some can barely make it to the comfort room.

On Saturday night, Jacinto bent his back many times to tune up, play the guitar and sing as if he’s in his 40s, jamming with fellow veterans Joey “Pepe” Smith, Resty Fabunan and younger rockers Ely Buendia, Marc Abaya and his son RJ Jr, among others. 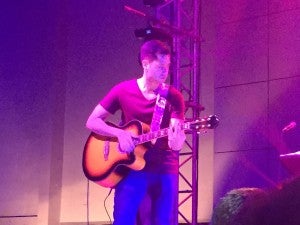 For reasons that we would regret for the rest of our sorry lives, we failed to see the early part of the show, where Basti Artadi of Wolfgang, Raimund Marasigan (Eraserheads, Sandwich, Cambio, Squid 9), Abaya, Kevin Roy and the rest of Razorback played their respective hits in what looked like—a bigger regret—half-filled Ynares Sports Center.

(We’ve learned it has a 2,400 seating capacity and there were many vacant seats in the general admission and the VIP areas.)

Many could have witnessed history-in-the-making in a yet to be written book on Pinoy Rock.

If we were able to catch the first part, it would have been a four-hour nostalgia trip and it was heartwarming to see people as old as our grandparents—or make that great grandparents—and as young as our 20 year old nieces and nephews sharing the center aisle, dancing and singing with the icons on stage.

The rock icons present were given plaques bearing the “Pinoy Rock and Roll Hall of Fame” award.

Still we’re thankful we were able to catch Jacinto playing his original all-time hit “Muli” and a new version of the 1980’s delightfully adapted “Sultans of Radio.” 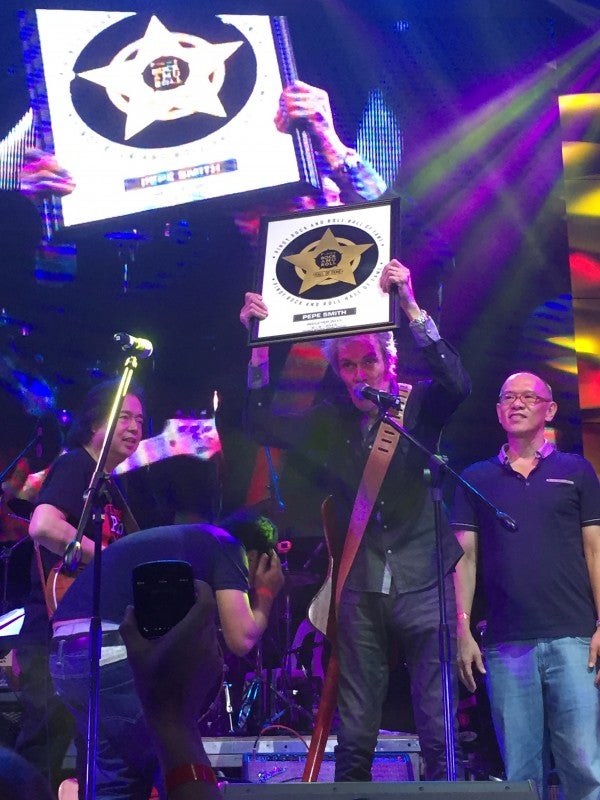 “Sultans…” was originally a tribute to the contribution of Radyo Bandido, Jacinto’s media outfit in the 1980s, to the Edsa People Power Revolution. Borrowing the music of Dire Straits’ “Sultan of Swing,” Jacinto overhauled the lyrics with his originally-penned Filipino words to re-tell history. Now, tweaking the lyrics, this time he narrated the contributions of Pepe Smith, Juan dela Cruz band, Resty Fabunan and Maria Cafra, Ely Buendia, Basti Artadi, Raimund Marasigan and the rest to the birth and growth of Pinoy Rock.

Jamming with Jacinto and his band, the sexagenarian Fabunan did his Macra Cafra hit, “Kumusta, Mga Kaibigan” and his 1976-released original Filipino blues titled “Pangako.”

There were fellow gray-haired rockers in the audience asking for more but he was only allowed to sing two originals. Yet seeing him still in top form doing screaming riffs and leads in his battered guitar was enough.

“Kaya salamat po kay RJ Jacinto. Dahil po sa kanya kaya ako nahilig mag-gitara. Grade school pa lang po ako, nakikinig na ako sa kanya (That’s why I am thanking RJ Jacinto. Because of him, I was drawn to playing guitars. I was still in grade school when I started listening to him),” Fabunan added in jest to which Jacinto thanked in return.

Before Jacinto jammed with Smith, he revealed Smith is three years short of reaching his age, or to be exact 67 years old already.

In response Jacinto told the audience, “Before we play, I would like to request everyone to buy Pepe Smith’s new video he’s about to release in stores nationwide, it’s [an instructional DVD] on how to lose weight.”

Buendia and Jacinto jammed a medley of an upbeat Elvis Presley song and a Beatles hit whose titles escaped our 40-something sleep-deprived memory before Buendia sang originals from his Eraserheads years, “Toyang” and “Huling El Bimbo”.

The finale of the night was Buendia, Smith, Fabunan and Abaya joining Jacinto onstage.

They all performed The Beatles “Hey Jude,” which we surmised was a favorite of Jacinto to end his major gigs. The “na-na-na-na-nanahhh” coda (end part) has always been perfect for that choir-like “videoke” moment.

To the older generation, Smith is obviously the enduring icon of Pinoy Rock, credited as its founding father. Without alluding to The Who, my generation looks up to Buendia and his compositions for The Eraserheads as the foundation of the second golden age of Pinoy Rock. 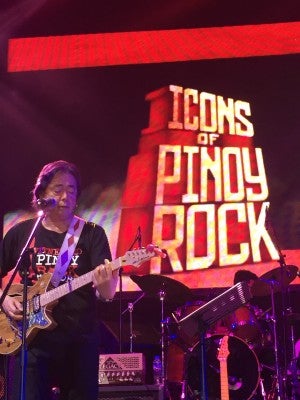 When Jacinto organized the Supersessions concert in 2008, it was only Buendia who was missing in the show that gathered the best of the best of local rock musicians. Back then, members of the Eraserheads were still at odds with each other.

So seeing Buendia on stage with Jacinto was like finding the missing piece of the puzzle.

But even more goose-bump inducing was seeing Smith and Buedia jamming and having a good time on stage without a care in the world. Two icons of different generations giving their best was something forever etched in our memory.

Well, personally it’s rare for us to see Buendia giving his all on stage. Most of the times, we’d just see him performing for the sake of finishing his songs, whether he is with Pupil, Oktaves or any other bands he’s jamming with. That night, he is Ely the “bombilya,” all lighted up, generating heat in the hall and seemingly about to explode.

And like any other gigs with these icons sharing the same stage, the concert is, in local parlance, “super-bitin”.

We were left hanging, wanting more of blinding “bombilyas” and sexagenarians.

Perhaps Jacinto could lend “Muli” and another original, “Sugat ng Puso”, to the likes of Buendia “bombilya” or Raims Marasigan to reach a much younger crowd.

(We’ve learned later that bossa-nova princess Sitti Navarro has been doing covers of “Muli” but it’s different if another rock musician or soft-rock balladeer like Ely Bombilya will revive it. Then again, imagine Daniel Padilla singing “Sugat ng Puso.”)

With the rate he’s going, RJ Jacinto looks too young to retire. Away from the concerns of the boardroom, he rocks his stresses away. Age is just a number. He, Smith and Fabunan are living examples of that. As the saying goes, old soldiers never die, they just turn into rheumatism-gout-arthritis-proof septuagenarian rock music icons.