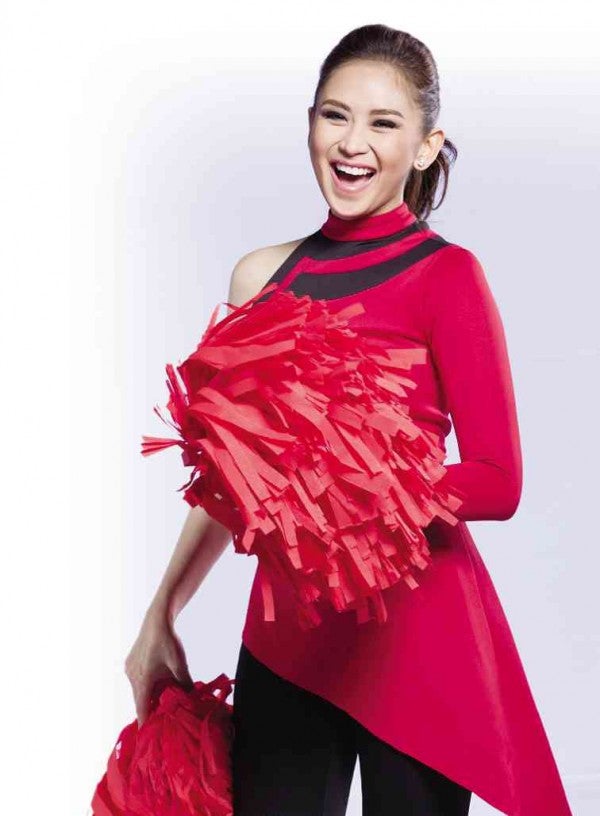 WINNING the title, “The Voice” coach says, isn’t for her but the contestant.

“The Voice” coach Sarah Geronimo said pressure has been lifted off her shoulders now that two of the three grand winners in the local version of the popular American reality TV singing competition were picked from her team.

“I’m already happy with my two victories, but I can’t just stop there. I am in it to win it,” Sarah said during a recent press conference at the ABS-CBN compound in Quezon City.

Lyca Gairanod, “The Voice Kids Season 1” winner, and Jason Dy, “The Voice of the Philippines Season 2” grand champ, both had Sarah as their coaches. First season winner Mitoy Yonting had Lea Salonga as mentor.

“Winning the title wasn’t for me but for the artist. When I handle the kids, I tell them not to concentrate on the title but on how to work well with other contestants, especially during the battles where they are required to perform with others,” said coach Sarah.

Also coaching for the second season of “The Voice Kids” is musician-songwriter Bamboo Mañalac. For the show’s adult edition, Filipino-born American rapper apl.de.ap  is also a coach.

“I’m just lucky. I can’t take all the credit. I think that Lyca would still win even if she was mentored by another coach—she is that talented. I also thank the Popsters (Sarah’s fan club) for their help. However, I can’t say that they made Lyca win because not all Filipino viewers are Popsters.”

Sarah said her relationship with the other coaches has  vastly improved. “Our producers encourage us to banter. Coach Lea told me to show my claws, to bring it on! It’s a challenge because it’s just not me,” the singer said. “The real Sarah is not as expressive, but I try my best to be one because I’m one of the coaches. It’s hard to make people understand what I really go through in each show—I consider Coach Lea the best mentor. I sometimes want to stand up there and audition, and then choose her as my mentor. Coach Bamboo is equally awesome.”

How proud are you of Lyca and Darren?

I am very proud of them. Lyca was with me during my recent concert tour in Canada and I noticed big improvements, even in her attitude. We know that Lyca grew up in an environment that’s very different from Darren’s. That’s why I really focused on her. Darren has always been amazing. He is already very polished. I’ve heard about his Arena concert and I’m proud that 85 percent of the venue was filled.
Darren may not have won the title, but God has other plans for him. That’s what we always tell the kids; the fulfillment of their dreams doesn’t stop at winning.

How do you feel about people comparing your two talents?

I feel bad about it because I was once their coach. People have misinterpreted me when I campaigned for Lyca, and then for Darren. I feel proud of both of them. Aside from her sob story, Lyca has also shown talent. I believe in her. People said that the show had become “The Votes.” Let’s face it, even in talent searches in the United States, it’s still the voters’ choice that prevails.

I have none. The role of a coach is to pick an artist who is dedicated, and then to  hone the skills of this kid in the best way she can.

Are you more picky now?

I don’t want to be too strict when it comes to dealing with the kids. We’re here to help them find their voices and discover their style. Pitch problems are normal. I encounter the same thing as a professional singer. As long as I see a kid’s potential and passion, I will fight to get him or her on my team.

The other coaches and I are hoping that the second batch would level up. I honestly feel bad whenever I have to choose one from a group of three kids. It’s really tough, but I make sure to prepare myself emotionally.

I’ve realized that, in all the seasons of “The Voice” I’ve been part of, it’s unavoidable that a kid will catch your attention. In the end you just have to be fair—choose that kid who has promise, who will stand out.