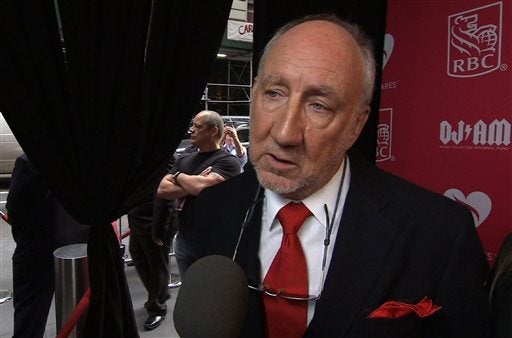 In this image made from APTN video, Pete Townshend arrives at Musicares event in New York, Thursday, May 28, 2015. AP

NEW YORK — Bruce Springsteen called Pete Townshend “the greatest rhythm guitarist of all-time,” told a story about attending his first Who concert as a pimply-faced teenager and joined Townshend and surprise guest Roger Daltrey onstage for a rocking set.

The rock icons attended the MusiCares MAP Fund benefit Thursday night in New York City, where Townshend and longtime Who manager Bill Curbishley were honored for their charitable efforts.

Springsteen, Daltrey and Townshend joined forces for “My Generation” at the Best Buy Theater in Times Square. They closed the event with “Won’t Get Fooled Again,” and were joined by Billy Idol and Willie Nile, who both hit the stage for solo sets earlier in the night.

Springsteen presented Townshend with the Stevie Ray Vaughan Award for his commitment to the MusiCares MAP Fund, which provides members of the music community access to addiction recovery treatment regardless of their financial situation.

The Boss said The Who was the first rock concert he saw in the late ’60s when the English band first toured America.

“All I knew was for some reason this music and the demolishing of these perfectly fine instruments filled me with incredible joy,” Springsteen said.

Springsteen said he was so inspired he imitated The Who’s set as a 16-year-old in the band The Castiles when he performed in for a school dance.

“As the nuns looked on with horror, I reached up and smashed them onto the dance floor.”

Springsteen earned a rousing applause from the crowd, but he also got serious in his near eight-minute speech.

Townshend, who turned 70 this month, told the crowd about smoking weed as an art student, tripping on LSD and turning to alcohol after using drugs.

“I was doing like three bottles of brandy a day … and I think I don’t look too bad for someone that drank cognac for 15 years,” he said to laughs from the audience.

“But the secret for me to be able to do this tour with The Who, this 50th anniversary tour, and still kind of put on a reasonable show … has been (because of) the 30 years I’ve been clean,” he added to loud cheers.

The night was a mix of laughable moments from the rock stars to high volume performances. Joan Jett rocked out in her signature black ensemble and Nile was energetic on the guitar. Daltrey was excited onstage and enticed the crowd with his signature windmill effect with the microphone. Idol matched his energy: He danced, waved his tongue and stuck half of his microphone down his pants while he clapped as the band began playing “Who Are You,” which earned Idol a standing ovation.

Elton John, Mick Jagger, Ronnie Wood, Roger Waters and Joe Walsh appeared in videos and offered kind words to Townshend and Curbishley. And Daltrey, 71, surprised the crowd when he jumped onstage after Curbishley accepted the From the Heart Award.

“It’s not easy to find an honest manager in this business,” Daltrey said to laughs, “especially in our period. Some of the artists will tell you.”

Curbishley said he was grateful that The Who has performed at benefit events like “12-12-12: The Concert for Sandy Relief” and “The Concert for New York City” in response to the Sept. 11 attacks.

“I’m a firm, firm believer in second chances, and third chances for that matter. …I had a bit of a rocky start in my early life, and then I had a second chance. Music gave me that second chance,” he said.

A 1962 guitar that Townshend bought from Daltrey was auctioned for $41,000; both performers autographed it. 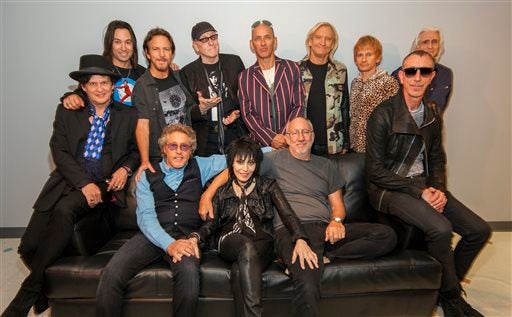