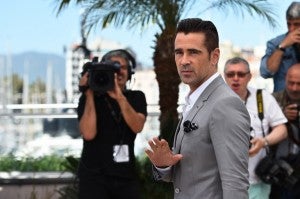 Irish actor Colin Farrell poses during a photocall for the film “The Lobster” at the 68th Cannes Film Festival in Cannes, southeastern France, on May 15, 2015. AFP PHOTO

CANNES, France—The movie industry’s obsession with slim figures and six-packs is notorious but if the Cannes Film Festival is anything to go by, a generous gut may now be key to winning critics’ hearts.

READ: So you think you have a dad bod

While the chiseled torsos of stars such as Matthew McConaughey and French heartthrob Jeremie Elkaim couldn’t save their Cannes movies from a critical mauling, a bit of paunch went over big at the festival, at least on screen.

In the modern-love satire “The Lobster”, Farrell plays a depressed man who has been dumped by his wife. He ends up at a seaside resort where he is given 45 days to find a mate or be transformed into an animal.

During a humiliating physical exam, his buttoned-up character is told to strip, revealing a hairy pot belly.

Farrell, 38, said he turned to a diet of pizza, cheeseburgers and ice cream to put on about 40 pounds (18 kilograms) for the role.

The usually trim Irishman told trade magazine The Hollywood Reporter that he “gasped” when he saw himself on the giant screen at the main Cannes venue.

“The Lobster” won rave reviews and was seen as a dark-horse contender to capture the coveted Cannes Palme d’Or top prize on Sunday.

Farrell was not the only one to take a page from Robert De Niro, who famously gained around 60 pounds to play the washed-up boxer Jake LaMotta in “Raging Bull”.

While Stone appears as her usual tiny slip of a thing, Phoenix, 40, flashes a tubby tummy in the existential murder tale.

In one of the film’s most lyrical scenes, an obese South American former footballer and Maradona lookalike imagines his glory days while bouncing a tennis ball off his still agile feet and his impressive girth.

The 66-year-old erstwhile screen idol, who has ballooned to massive proportions in recent years, appears sweating, panting and shirtless in much of the movie.

But he’s a gentle giant with his diminutive co-star Isabelle Huppert, who also drew strong reviews, as they seek together to make sense of their son’s suicide.

Depardieu told reporters he wasn’t bashful about showing his age and its accompanying pounds as a kind of badge of honor.

“The marks of time are clear in our appearance but it’s joy, love and sharing that take precedence when bodies age and decline,” he said.