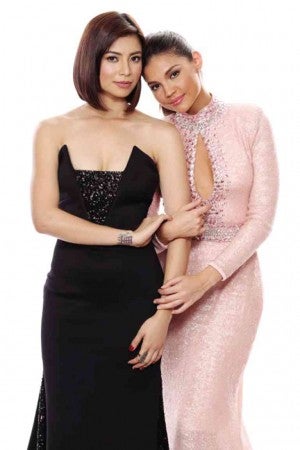 RHIAN Ramos steps out of her comfort zone as an actress in GMA 7’s new drama series, “The Rich Man’s Daughter,” where she ventures into the “danger zone” in her portrayal of a lesbian. (The show airs weeknights after “Let the Love Begin” on the prime time block).

Kudos to Rhian for being daring enough to try something that’s so “un-her.” The series will undoubtedly redefine acting for Rhian.

It tells the story of a rich man Oscar (Al Tantay) who, after learning that his daughter Jade (Rhian) is a lesbian, offers P5 million to the man who will marry her. Needless to say, the dad’s plan thrusts the family into topsy-turvy discoveries.

Since I have a gay son, IC Mendoza, this LGBT-themed show affects me tremendously.

“The Rich Man’s Daughter” is out to top the success of another LGBT-themed show, “My Husband’s Lover.”

One love fits all!

What do you think of  lesbians?

I don’t really think of lesbians any differently from how I think of anyone else. I’ve probably met many without noticing or being told what their preference was. My only current references now are some of the show’s fans who are strong, smart lesbians that crack the funniest jokes, and love a good love story, just like me.

Would you be open to a relationship with a lesbian?

It has never happened to me before, but I imagine I’d still pick a man because I’ve only ever liked boys, so far. I suppose it’s such a challenge for me to even picture being courted by a girl, since I especially like the man I’m  with now.

What’s the most important love lesson you’ve learned so far?

At the risk of sounding unromantic, it’s “love isn’t enough.” There are many other equally important factors that make a relationship a healthy one.
What makes your relationship with Jason Choachuy  work?

The kind of sweet person he is makes it easy for us to get along and power through our busy schedules. Aside from possessing the kind of confidence I look for in a guy, he’s a supportive, encouraging, sincere, appreciative, funny, smart person who takes good care of me.
How does Jason feel about your lesbian role?

He was really happy for me. He knows that when it comes to my job, I love a new challenge. He was my biggest supporter, especially in the first couple of weeks of taping, when I would call him and tell him I was having a hard time because I felt so unprepared.

He also visits me sometimes and was there when (costar) Glaiza (de Castro) and I had our most daring photo shoot. He seemed like he was pretty comfortable with it… that or at least he’s a good sport!
What’s the craziest thing you’ve done for love?

I’ve never been allowed to travel with a boyfriend. I’ve been guilt-tripped into breaking that rule twice. There was a time I was so in love—in the young, stupid and blind way—that I could be guilt-tripped into doing anything, mostly at the expense of my mom’s rules and preferences… which, I later learned, was a really unhealthy way to be in a relationship, and that moms have reasons for rules.

What are your cheap thrills?

Avocado shakes, flooring a gas pedal, playing with pets, finding out about cool independent clothing brands, that smell after a match is lit, cheese-flavored snacks, the smell of gasoline, watching elderly people, Guagua-style halo-halo, learning new words, that 30-minute period when my tummy is flat in the morning, getting a buzz from strong coffee.

That’s something I haven’t really thought about… I would think that if someone were to propose to me it was because he already knew he would get a yes. So under such circumstances, I guess I’d be happy if my family already knew and gave him their blessing.

What are your quirks?

I always sing—in traffic, in the shower, while sewing, even while walking alone in public places like a mall. I’m pretty shameless about it.

If you could be a man for a day, who would you be?

Leonardo DiCaprio! I love his acting and choice of roles. Plus, he dates the prettiest models.

Time to laugh your homesickness away!