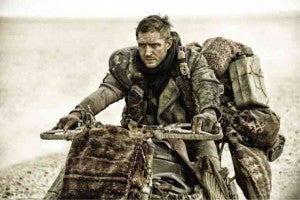 HARDY as Max, a character he first saw when he was 7.

LOS ANGELES—George Miller scores quite an achievement—after 30 years, he revisits his franchise and delivers his best one yet in “Mad Max: Fury Road.” In fact, it’s an action movie masterpiece. Shot with minimal CGI, the movie is a spectacular cinematic feast that surprisingly has a personal dimension to it amid the intense car and truck crashes and explosions. Even better, that humanist touch springs from a feminist thrust, thanks largely to the female warrior character played by Charlize Theron, Furiosa.

More about Charlize and why she owns this movie, set 45 years after the world has collapsed and civilization is but a memory, in a coming column. In the meantime, we write about Tom Hardy, who should become a full-fledged star with this movie that topbills him in the title role.

The entire cast is top-notch, including Nicholas Hoult as Nux, under the direction of George, who interestingly enough, also megged “Happy Feet” and “Babe: Pig in the City.” We think it’s a credit to the Australian filmmaker that he can direct such diverse movies.

Tom walked into a room at the Siren Studios on Sunset Boulevard looking like a hip-hop star—red tee over a black one, loose pants, white sneakers, lots of rings and bracelets.

He explained that the cropped hair and long beard are for his movie with Leonardo DiCaprio, Alejandro G. Iñarritu’s “The Revenant,” which he jokingly called “Alejandro’s Beast.” (The 1820s set movie, Alejandro’s next after his award-winning “Birdman,” looks very promising, based on the extended footage that we recently saw.)

“I need to have short hair because of the wig that I’m wearing in the film that I’m doing with Alejandro at the moment,” the 37-year-old British actor said. “This beard is also because of that movie we’re shooting right now. So Leo and I are both wearing beards until we finish ‘Alejandro’s Beast.’” He said with a touch of irony, “Yeah, that’s why I look so good at the moment.”

On how he landed the role of a lifetime, Max Rockatansky (originally played by Mel Gibson in the franchise), the heavily tattooed actor began, “Everybody knew that (a new) ‘Mad Max’ was out there and that they were casting. I was on the set with Joel Edgerton at the time, shooting ‘Warrior’ when he received the script. I thought, oh well, that’s quite right that it went to an Australian. I won’t pay it any more mind. Then we carried on shooting ‘Warrior.’

“But when I was doing ‘Inception’ after ‘Warrior,’ George hadn’t found his Max yet. He was still looking at various actors. I was asked to come in and meet George and Nico Lathouris (cowriter) as dramaturg.” Actors went through a unique audition process where they were asked to read from their pick of five radically different scenarios. 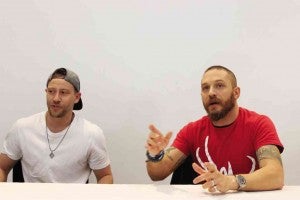 STUNTMAN Jacob Tomuri and the rest of the team pushed themselves to the limit in this action-packed movie. Ruben V. Nepales

Tom was ready with his picks for the audition but instead, he said that “we had a conversation but it turned into a different affair altogether. We sat and talked for a couple of hours about theater and character analysis—nerdy stuff which I really like.

“Then George offered me the role. When I got over the immediate jubilation and excitement, I suddenly realized that ‘Mad Max’ is synonymous with Mel Gibson. Obviously, everybody loves Mel being Mad Max. So that was a little bit daunting. What I had to realize at that point was that it was George who created Mad Max in that post-apocalyptic world. George, with his imagination, gave birth to that world with Mel being Max at the time.

“George also gave birth to this ‘little’ car chase movie in many ways as well. It was about going into a new era of development with it so I didn’t have to worry too much about that. But I could rely on the fact that George had asked me to come and play his Max today.”

Tom, who was only two years old when the first “Mad Max,” starring Mel, came out in 1979, revealed that he did meet with the original road warrior in Los Angeles. “I thought it was the right thing to go, touch base and meet him because it’s the ‘Mad Max’ family and has been for some 30-plus years,” Tom said as he played with two rings he took off from his fingers.

He added, “It’s like being the new wife, you know (laughs). You have to meet the old wife and they’ve got kids together. I suppose I have custody of those children in some ways. I have to protect them as well. George is ultimately the patriarch of that family and now, I’m playing Max.” And he makes his own Max Rockatansky—he brings a brooding, very human dimension to the mythic figure in a dystopian landscape.

Tom recalled that he caught his first glimpse of “Mad Max” when he was “about 7 or 8 years old. My cousins were watching it. I thought it was a bit weird and confusing. It was very 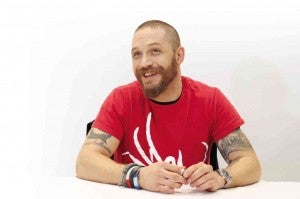 adult and grown-up for a 7-year-old.”

The actor himself reveled in the fact that amid the slam-bang action, the crux of the story deals with women and freedom. “Women should be celebrated more across the arts,” Tom said. “It’s fantastic that Charlize is leading this. She has such a profoundly unique character.”

Women play an important role in his life, Tom claimed. “My mom (Anne Hardy) is the most special woman in the world, next to my wife (Charlotte Riley) and hopefully, one day, maybe a daughter.

“Women are the most profoundly important people who supported my growth and development as a person. My relationship with my mother and strong women—their support and innate wisdom have helped me carve my way through today. So, I have tremendous and profound respect for women. But I am still human. My wife would probably pick me apart for still being irritating (laughs). I’m a bloke, you know.”

Since he stars in a movie that features thrilling chase scenes involving hot rods, trucks, rigs and motorcycles, he was asked a question about this. “Do I know anything about cars, maintenance and engineering?” he repeated the question aloud. “No,” he answered with a laugh. “Nothing, so I can only drive an automatic. I learned to drive when I was 30 because I live in London. We have the Tube. You also get around on buses. You have sneakers on so you can use your feet and walk. You get out in the rain and enjoy that. 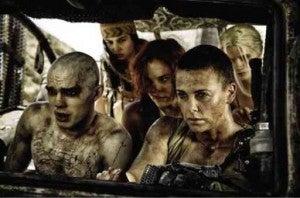 “I didn’t really see much need for a car until I was 30. I had to take my partner at the time (Rachael Speed) to the hospital so she could give birth to Louis (their son, born in 2008). So, I learned to drive.”

Talk about the dangerous-looking stunts he and the cast did in the movie prompted him to gallantly call Jacob Tomuri, who was seated in the back, to come forward and sit beside him.

“He’s not just my stunt double,” Tom said of Jacob, in a white tee, his cap backwards. “There’s an interesting thing that’s happening here with George’s film. There’s a lot going on in films where, with good reason, you want the actor to take credit for the stunts that are happening so the audience doesn’t feel like it’s being misled.

“But the truth is that we can’t obviously do some of the things that you see on film. Superman can’t really fly and Jacob can’t, too, but he can fall, right? What George has done is embrace the stunt department. He also challenged the stuntmen, drivers, riggers and effects people to create a fully dynamic world which was free from artifice to a degree that there was no CGI at all. It was what he demanded from Jacob and the entire team. George pushed them beyond their degree of expertise.”

Tom stressed, “What we’re celebrating with ‘Fury Road’ is back to old school filmmaking methods. Not to denounce CGI because there’s a place for it but these guys did some death-defying stuff out there. Anything that I did was like a little ride compared to the stuff that Jacob did.”