LOS ANGELES – Zsa Zsa Gabor’s husband said she was doing better hours after she lost consciousness at her Los Angeles-area mansion and was rushed to a hospital. 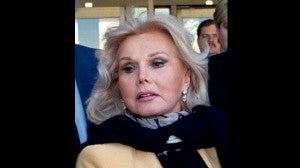 Husband Frederic Prinz von Anhalt said late Saturday that Gabor’s fever was down, she’s responding to antibiotics, and she has opened her eyes, though she hasn’t spoken.

Doctors at UCLA Ronald Reagan Medical Center were planning to replace a tube that was bleeding in her stomach on Sunday.

Von Anhalt said his wife is a “fighter” and he was confident she would make it.

The 94-year-old actress appeared in a handful of films, but has been most famous for playing the role of herself on talk shows, game shows and at times the news.

She has been hospitalized repeatedly since breaking her hip in July 2010.

Read Next
Zsa Zsa Gabor rushed to hospital in Los Angeles
EDITORS' PICK
vivo brings to the Philippines a powerful smartphone with a slimmer body, the vivo Y02s for only PHP 6,499
Apple warns of flaw that lets hackers into iPhones, Macs
46% of schools nationwide to have full face-to-face classes on Aug. 22
House energy committee chair Arroyo bats for cheap electricity
What to watch out for when selecting a video surveillance solution
Heads may roll at BOC, says Palace if sugar smugglers are allowed to use recycled import permits
MOST READ
DepEd to give teachers P5K cash allowance within first week of classes
LOOK: Miel Pangilinan dazzles in glittery pre-debut shoot
DOJ indicts bank officer in $2.1 billion Wirecard fiasco
PH importing sugar after all: Marcos okays 150,000 MT
Don't miss out on the latest news and information.