The Script gets away with chucking show conventions 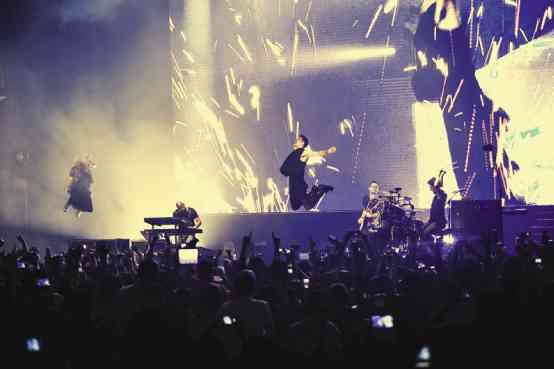 IT WAS the Script’s trademark songs about heartbreak that inspired the loudest and most impassioned reaction from the crowd.

The Script’s third and recent Manila concert was as much about audience-performer interaction as it was about the music. Danny O’Donoghue, front man of the Irish pop-rock band, covered a lot of ground at the SM Mall of Asia Arena that night, making sure he stayed as close as he possibly could to the thousands that turned up.

The group—completed by guitarist Mark Sheehan and drummer Glen Power—did away with the typical show conventions, and emerged not onstage but from the very entrance the people had used to get in. Flanked by files of fans hoisting and waving green flags, O’Donoghue raised his arm to a chorus of cheers and screams, and marched past the crowd and toward the deck, where he kicked off his set with “Paint the Town Green.”

Before long, he was already leaning over the crowd and dispensing high-fives. “We’re honored to be here again; you make us feel at home,” O’Donoghue said. “Thank you for making us feel like we’re the biggest f***ing band on the planet!”

Midway through the concert, the three-man band from Dublin transferred to the smaller and more intimate B-stage mounted at the back end of the floor. And when the spotlights beamed down to reveal the musicians, the fans—mostly young women—clambered onto the chairs and crowded around the stage, the better to record the trio’s performance of “Never Seen Anything Quite Like You.”

Before continuing the stirring sing-along session with a mellow, piano-driven version of the group’s breakout hit single, “The Man Who Can’t Be Moved,” O’Donoghue reminisced about his and the band’s humble beginnings as “broke-a** musicians.” “We were very poor before you guys gave us the best eight years of our lives,” he related. “I just want to thank all of you for that.”

“It’s very rare getting so many like-minded people under one roof, different religions, colors, races, everything… That’s the power of music,” O’Donoghue said, adding that he admires the fact that Filipinos “absolutely love music through and through.”

The band knows very well how security can, at times, inadvertently spoil the fun for being “pains in the a**.” And so they implored the bouncers near the stage to ease up. “Let them enjoy themselves… We all came here to have a good time,” Sheehan said to roars of approval.

What followed was an old gimmick, which involved O’Donoghue asking for a fan’s mobile phone, and using it to call said fan’s ex—while performing the song “Nothing.” He had done this during their concert in Manila two years ago, but the singer relented to the clamor of the diehards, who sang and shouted every time O’Donoghue ran around the stage and pointed the phone at their direction.

In “You Won’t Feel a Thing,” O’Donoghue found himself in the venue’s lower box section, wading through overwhelmed fans forcing their way through security to grope, hug, kiss or take selfies with the 34-year-old singer-songwriter. The rest of the crowd—envious, for sure—watched the bedlam unfold on the massive LED screen onstage.

The set list was similar to that of their previous show, with newer songs from the band’s fourth and latest album, “No Sound Without Silence,” like the acoustic, country-inflected “Man on Wire,” “The Energy Never Dies” and the uplifting anthem “Superheroes,” whose effect was amplified by neon lights and trippy screen imagery. 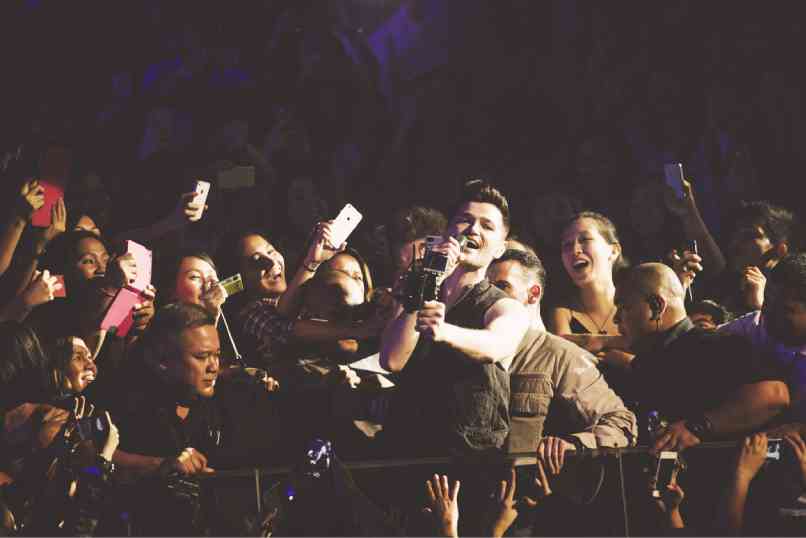 “IT’S VERY rare getting so many like-minded people under one roof,” said O’Donoghue, (right) who sang to a fan’s ex via mobile phone. Photos by Kris Rocha for Midas Promotions

Just the same, it was The Script’s trademark songs about heartbreak that inspired the loudest and most impassioned reaction from the crowd. O’Donoghue—in a sleeveless, all-black outfit—slammed on the keyboards in “Breakeven,” as the fans sang their hearts out. “Before the Worst,” meanwhile, had the lithe and deceptively energetic performer dancing around, his gangly limbs splaying in the air.

The band ended the concert—mounted by Midas Promotions—with O’Donoghue asking the audience to light up their phones as “Hall of Fame” was played.

“I want us to create a moment,” said the charming artist, who vowed that it wouldn’t take long for the band to create yet another one soon for Filipino fans.