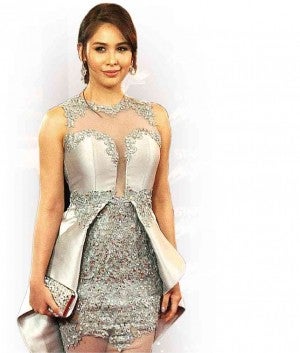 YOUNG actress Empress Schuck is thankful of the support of her family and boyfriend Vino Guingona. FILE/RICHARD A. REYES

The 22-year-old GMA Network star made the revelation on Saturday to fellow Kapuso Jennylyn Mercado over Startalk, the Philippine Entertainment Portal (PEP) has reported.

Schuck chose to reveal her condition to close friend Mercado who went through a similar early pregnancy when she was 21 years old, PEP said.

According to her, reality was slow to sink into her after she found out that she was on the family way.

“Tapos bigla akong nag-breakdown. Iyak ako talaga,” (Then I suddenly broke down. I cried hard) she was reported as saying.

The first person she talked to was Guingona and then her older sister, both of whom Schuck said supported her in her time of need.

Accompanied by Vino and her manager, Becky Aguila, the actress then told her parents, especially her mother—ready for their anger and violent reactions.

She was thankful for her boyfriend who became protective of her. “Hindi niya ako iniwan.”

But while accepting her unplanned pregnancy, Schuck said marriage was another thing. “That’s another responsibility,” she was quoted as saying.

Marriage, she said, “[ay] isang bagay na pinaplano talaga. Kailangan pinag-uusapan at pinaghahandaan.” (is something one really prepares for. It needs to be talked about and prepared for.) CB

Read Next
A. Lipin, April 13, 2015
EDITORS' PICK
Smart poised to turn PH into ‘Smart 5G country’ with nationwide rollout
Full operation of more sectors, businesses pressed to spur economy
Get 80% OFF Ignite 2020 Cyber Tickets starting 28 September
We don’t want gov’t to fail, because it’s all of us who will suffer and die — Robredo
Water remains our saving grace right now
New Vatican ambassador to PH named
MOST READ
Fernandez: Velasco camp ‘betrayal’ pushes call to retain Cayetano as Speaker
Palace: Some cities in Metro Manila eligible for MGCQ
Mayor Treñas tells Locsin: Iloilo City is much better than what you think
Duterte not keen on extending term — Palace
Don't miss out on the latest news and information.

Which dogs are most playful?