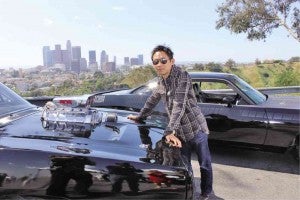 JAMES Wan on the parking lot of LA’s Dodger Stadium, where the franchise’s exotic cars are on display. He tells the Inquirer, “From a practical filmmaking standpoint… I never questioned our ability to finish it (after Walker’s death). The hardest part was getting around the emotion.”RUBEN V. NEPALES

LOS ANGELES—Now it can be told: “Fast & Furious 7” director James Wan would have quit, had the producers decided to kill Paul Walker’s character after the actor perished in an off-set car accident midway through the shoot. The Asian-Australian said in a recent interview, “I was like, ‘If you guys are going to do that, you’ll have to make the rest of this movie without me.’”

“The biggest thing was working out what we wanted to say with Paul’s character in the end,” said the Sarawak, Malaysia native, whose direction of the franchise’s seventh and most crucial installment was well-received by fans and critics. “Furious 7” broke many box-office records and is now in the league of the huge “Harry Potter” and “James Bond” franchises.

“We knew that we didn’t want to kill Paul’s character off. I was so against it,” stressed the spiky-haired filmmaker, who was raised in Australia. We talked to him inside a fancy tent on the parking lot of LA’s Dodger Stadium where the franchise’s exotic cars were on display.

“Thankfully, (producer) Neal Moritz and the studio felt the same,” said the director who made his mark with hit horror films “The Conjuring,” “Saw” and “Insidious.”

“We—and all the actors—loved Paul. We wanted to send him off in the most honorable way. Once we realized that’s what we wanted to do, then it became a case of stepping back from the rest of the movie and what we had shot so far. We looked at it and went, ‘What can we do to start layering in throughout the movie, leading up to this ending that we want to achieve?’”

PAUL was much-loved by the cast and crew. “I looked up to him,” says costar Jason Statham.

“We needed [a sense of closure],” said the director of Malaysian and Chinese descent. Cody and Caleb Walker were tapped to help complete, via digital technology, their brother’s scenes in the movie. “I don’t mean just from a logistical, practical reason. We needed it because for myself and definitely for all the actors, it brought closure. It allowed [us] to work with Paul again, even though it wasn’t Paul.

“It was very important for the family as well to be able to do this for their brother one last time. It also afforded them closure, and to say goodbye to him, too.”

James admitted that it was extra tough to finish the movie after the tragic incident. “Making such a big movie is very challenging to begin with. But to throw in that extra layer of heartache with Paul and then physically not have Paul around just made it a different kind of movie. It wasn’t like I could just pick up the phone and call another filmmaker and say, ‘Hey, when this happened to you, what did you do?’”

James emphasized, “It was nothing like that. It was unprecedented but, what was interesting for me, from a practical filmmaking standpoint, was that I never questioned our ability to finish. The hardest part was getting around the emotion.”

He added, “But I did ask myself whether or not I had the strength in me to wake up every morning, go to the set, pick up the pieces and have to put on a brave face for all of my actors who were so heartbroken and tell them, as captain of the ship, ‘Guys, don’t worry. We can do it. We can soldier on and make this work.’

“That part I did question but then it became very apparent to us at a particular point that we had to finish the movie for Paul. I wanted to finish this movie to honor Paul’s legacy and his 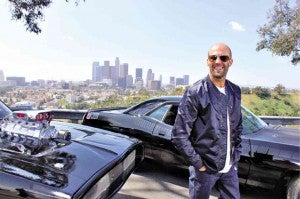 STATHAM remembers Paul Walker as being down-to-earth, “not a Hollywood type.”

memories. We were all on the same page.”

We congratulated James on being a pioneering Asian-Australian director who is clearing a path in Hollywood. “I think I’m the very first to fill that quota,” said the young-looking filmmaker (he is 38) with a laugh. “I’m very proud of that. I represent Australia and Asia at the same time. Pacific-Asia, I should say. It’s funny because I come here (LA) and straight away, the Asian-American community latches on to me (laughs). ‘You’re now one of us!’ Yeah, okay. Really?”

Jason Statham, who plays the villain Deckard Shaw and is a “newcomer” to the franchise, said of Paul, “We used to go to Willow Springs (Raceway in Rosamond, California) and race there. I used to have a (Porsche) GT2. He was very fond of racing around the track. That’s where I met him. I just remember him being very down-to-earth, not a Hollywood type, someone who doesn’t have a big ego, who’s always about his family.

“Paul did a lot for charity. He was someone I really admired, looked up to and had a lot of respect for.” 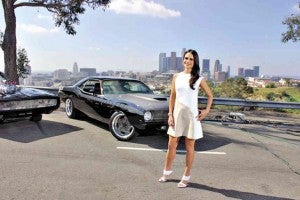 Jordana Brewster, who plays Mia, was misty-eyed when she talked about Paul, especially about filming the ending scene, an homage to the late actor, handled with grace and just the right touch by James.

“The ending, shot in Malibu, was obviously a very emotional and difficult scene to shoot, to say the least,” said the lovely actress, who resembles

Demi Moore. “It was a conclusion, in a way, for Paul’s Brian character.

“James was patient. We had to take a lot of breaks because it got too overwhelming. We would break and cry and then go back to filming. I did the best I could.”

Of the actor himself, Jordana said, “Paul had this way about him that was so open, genuine, authentic and beautiful. That’s how he was with the crew and his cast mates. I remember him being so alive and warm. There was a feeling of safety whenever I was with him. I remember his spirit more than anything.”

Jordana shared her recollection of that sad day in 2013: “I was in Texas when Paul passed. I remember days of just losing it. What really affected me was when complete strangers were like, ‘I’m so sorry.’ Even if people didn’t know Paul personally, they got him.

“Recently, someone at Starbucks came up to me and said that Paul helped a buddy of his by paying for something, unbeknownst to him. Everything Paul did was on the down-low. He visited a crew member who was in the hospital. He was an authentic, cool guy. We really lost a special person.”

Michelle Rodriguez, who plays Letty, requested in advance to not be asked about Paul, whom she was very close to. Instead, Michelle gladly talked about being in the Philippines—once 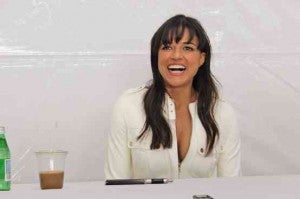 MICHELLE Rodriguez was in Manila with Vin Diesel for the premiere of “Fast & Furious 6.”

on her way to an island in the region, and again, for the Manila premiere of “Fast & Furious 6,” with Vin Diesel.

“I like Manila!” she exclaimed. “And I love (Manny) Pacquiao. I can’t wait for his fight with (Floyd) Mayweather. Manny seems like he has a really big heart. I can see that. He seems [like] a really cool guy.” Asked if she’s watching the fight in Las Vegas, Michelle replied, “I’ll be there with bells on!”