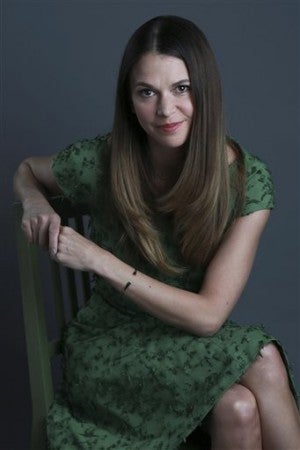 NEW YORK — Sutton Foster doesn’t turn back time on her new TV series, “Younger,” she just lies about her age.

Created and produced by Darren Starr (behind “Sex and the City”), “Younger” stars Sutton Foster as a 40-year-old named Liza, who is divorced and finds she cannot get an entry-level job in publishing because she’s considered too old. So, with the help of a friend (Debi Mazar), she pretends to be 26 years old.

The lie snowballs and Liza finds herself not just pretending at work (with a deliciously over-the-top boss played by Miriam Shor), but also creating a social life as a 26-year-old. Liza gets a younger boyfriend who thinks they’re the same age and a new BFF (Hilary Duff). Sometimes she forgets the lie isn’t real, like when she cracks up over a “suicide pact” she makes with Duff’s character to enforce when they get “old.” Other times it takes her a few beats to catch up, like when she tries to decipher texting acronyms.

There are shades of “Sex and the City” in “Younger.” The series was shot in Manhattan and Brooklyn, and Patricia Field is the wardrobe consultant. While the premise is about age, the heart of the show is the friendships among the women.

Cast members talked about the series in recent interviews, with their answers edited for length and clarity.

Associated Press: Aging is something many women worry about but Sutton, let’s be real, you’re not old.

Sutton Foster: I just turned 40 so I don’t feel old. I still feel very relevant and … hip to … whatever’s goin’ on. (Laughs.) But I do sort of understand. … Even as I’m sort of navigating my own life and my own career you see like this legion of young people comin’ down the pike and you’re like, ‘Oh, wow!’ There are roles that I’m gonna no longer be able to play because it’s a reality.’ 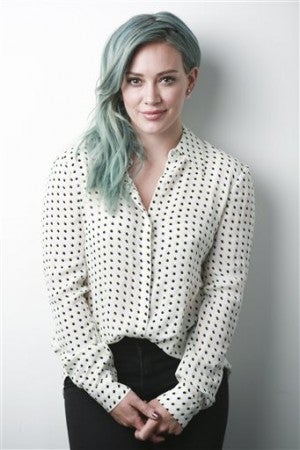 Debi Mazar: It’s a current conversation. My friend Madonna is sort of like the cheerleader, the ringleader of this discussion of ageism to a degree. She falls off the stage, she gets back up. Her tours have sold out already like across the world practically, and I mean she’s 56. I find her really inspiring. I think that this discussion is something women have.

AP: “Younger” tapes in New York and Brooklyn. Hilary, was it a difficult decision to relocate from Los Angeles?

Hilary Duff: I read the pilot and I’m like, ‘Oh, such a good one.’ … Then I get on the phone with (Darren Starr) and my agent and they’re like, ‘OK, we’re shooting in New York in September,’ and I was like, ‘Wait, what? I can’t do that. My son just started school. I’m in the middle of making my record. I’m separated from my husband.’ (She’s since filed for divorce from former pro hockey player Mike Comrie.) I mean there was a lot — it was a big year for me, so it was a big chance and a big risk and I’m so glad I did it. I think the change of scenery was good for me.

AP: What is the wardrobe for the show?

Miriam Shor: My character, Diana Trout, can push some boundaries. It helps you create the character. She has the audacity to put on a necklace that Flava Flav would be like, ‘Mmm, I don’t think we can rock that.’ She’d be like, ‘Yes we can!’ She pulls it off.

AP: Nico, you’re the only male in the cast (playing Liza’s tattoo artist, Brooklyn hipster boyfriend, Josh). What’s that like?

Nico Tortorella: Fantastic! I wish every job was like this. (Laughs.) I wouldn’t trade it for anything. Are you kidding? It’s amazing.