At 40, Ryan Phillippe still gets carded 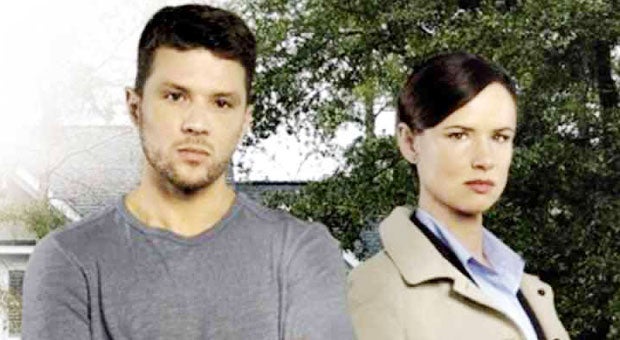 RYAN Phillippe and Juliette Lewis in “Secrets and Lies”

LOS ANGELES—At 40, Ryan Phillippe looks so young that he still gets carded occasionally. Ryan’s attire in this recent interview—a T-shirt and jeans— made him look even more youthful. In fact, the actor sometimes gets mistaken for being the brother of Ava, his teen daughter with ex-wife Reese Witherspoon.

The father of three—his other kids are Deacon, his son with Reese; and Kailani, his daughter with ex-girlfriend Alexis Knapp—stars in ABC’s new crime drama, “Secrets and Lies.” Ryan plays Ben Crawford, father of two girls, who finds the body of a young boy while jogging and ends up being the prime suspect. Juliette Lewis plays a relentless detective while KaDee Strickland portrays Ben’s wife.

You turned 40 last year. Did you set new goals for yourself?

I am coming to terms with turning 40 (laughs), which is not the easiest thing to do. There is something about knowing yourself better and maybe feeling less pressure to conform to people’s ideas or perception of you. There’s a little more [sense of] competition when you are younger and wanting to achieve. Now, it’s a little more about self-satisfaction. I am only trying to improve or impress myself, in a way.

That’s why I directed my first movie (“Catch Hell”) in the last two years. I produced this award-winning human rights documentary (“Isolated”). I am going to direct my second movie this spring.

If you eat right and exercise, it makes aging that much less disturbing, depressing and difficult. I have had mood issues throughout my life so exercise and meditation have become very

THE ACTOR says he “took the work home,” unable to shake roles off when he was younger. photo by ruben nepales

To be honest, I do research a lot on antiaging (laughs). I have a lot of knowledge about supplements and diet related to aging. I still get carded (laughs). I am like, “I am 20 years older than you are assuming that I might be,” which is really odd. I have a daughter in high school. That’s the other weird part—sometimes people think I am her brother. She hates that. It creeps her out.

I am varying my interests. I have an Internet start-up that is going to launch in May. I am super-excited about that. It’s called Deedle. The whole premise is that we are giving away incredible things for free. The app is free. You play this very simple game to try to win incredible prizes from great companies like Xbox and Puma. It’s named after my son Deacon whose nickname when he was little was Deedle. The website is available now for early sign ups at www.thedeedle.com.

How good are you at keeping secrets? Are you a good or a bad liar?

I am great at keeping secrets and I am a great liar. I am a great confidante because I don’t talk a great deal. I am not the most social person so I am a good person to tell stuff to. The chances of me revealing it to anyone else are slim. As far as being a good liar, I think that’s partially why I became an actor. It was something that was always there since I was a little kid. I tried to find something good to do with it other than bad.

Being a dad yourself, one who has to deal with media attention, must help you a lot in playing a father in this series.

It’s a definite asset that I am an actual father. There is an ease with those scenes with the younger actors that might be hard to manufacture. What the girls in the series go through once the media is so focused on their father, is something that my kids, in some ways, have to deal with. They deal with cameras on their faces and their parents being asked weird questions that they don’t understand when they are leaving at LAX or wherever.

What’s the most challenging aspect of being on this series?

The hardest part, other than the physical and emotional demands of the show, is that I have to be on location and my kids can’t be with me. As I get older, and they get older, that’s becoming more and more of a problem for me. It’s something (going on location) that I’m not as willing to do anymore.

That’s why I have been acting a bit less over the past few years because I just don’t want to miss out on [time with them]. They are 11 and 15. I don’t have time left with them at home. I am not going to spend that time on the other side of the country. There’s lots of jobs that I said no to because the things that are most important to me would be neglected.

Do your roles affect you even when you’re no longer on the set?

When I was younger, I would take the work home with me. There would even be this sort of hangover after the project is finished, when you couldn’t shake the role off. This was before I had kids. Once you have kids, all that stuff that is immature in some ways or “unevolved,” changes. If I get off work, no matter what the material I am doing, if I have to come home, cook dinner and get lunches ready for the next day (for his children), that’s where my head goes (laughs).

That is a great thing. There are so many great things about having kids but you instantly become less selfish. If you are going to be a good parent, you cannot be a selfish individual.