The rain was but a niggling inconvenience to thousands of young fans who turned up at SM Mall of Asia Concert Grounds on Sunday night to watch One Direction (1D)—the boy band of this generation—perform live, and make them feel all gooey inside.

A teenage girl wearing a black trash bag as raincoat and a red scarf around her head could only see the bright side: “We’ll get to see them perform wet.”

This was the last of the British-Irish band’s two-night concert in Manila. Although the grounds were not as packed as it was the previous night, the energy, according to those mad enough to watch both shows, was a lot more infectious.

Hordes of indefatigable girls and a number of boys—most of them accompanied by listless parents and chaperones—were relentless in their shrieking, commencing way before the band materialized on the sprawling stage. When Harry Styles, Liam Payne, Niall Horan and Louis Tomlinson finally did, the diehards just lost it.

The boys opened with the anthemic “Clouds,” promptly sending the audience jumping and singing (screaming) along. Let alone fans inside the venue, many more outside, on the streets around the grounds (they called themselves “Team Labas”) because they had no tickets, vigorously joined the hysteria.

Harry, Liam, Niall and Louis had come out running, dressed ruggedly and looking disheveled. It was clear this band was not the kind that many of us grew up with. No cutesy, synchronized choreography there, no attempt to peddle a wholesome boy-next-door image. But they were petty boys, yes, and the girls wasted no time in professing love to their individual favorites.

Quite the live wire, Harry punched the air as he pranced about. More than twice he opened a bottle of water and cheekily doused the fans with its contents. It was all about his wavy locks, which he tousled every now and then. “I can’t decide if I like his hair in a ‘man bun or untied,’” someone beside us remarked.

Harry, 21, is also, arguably, the best vocalist of the four, his somewhat raspy tone soaring in such hit songs as “Little Things” and “Story of My Life.” 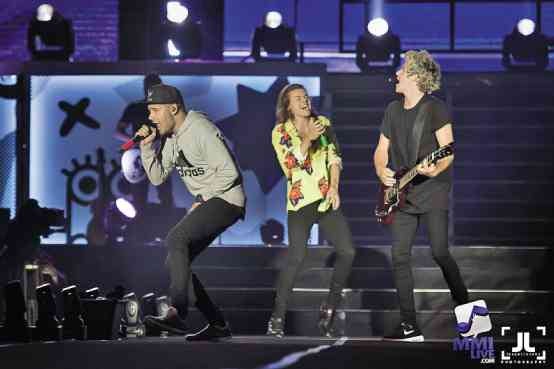 Liam was de facto host, often initiating audience participation, and making sure those in the very far end of the grounds did not feel left out. He tried reading some of the banners. One said, “Liam, please say nakakapagpabagabag.” Of course he messed it up, and the fans loved that.

“We’ve been here two days and we’ve fallen in love with Manila because you’ve been amazing. Thank you all for standing in the rain… screw the rain!” said Liam. He was also a competent singer, his falsetto particularly impressive, especially when followed by his signature microphone flip, for flourish.

Niall looked unassuming, but was the only one confident enough to play a musical instrument—a guitar—which he lugged around the stage for the better part of the concert. Meanwhile, Louis, who had his hair up in a slick pompadour, had sort of a crumbly voice that would probably shine in slow, pop-punk numbers.

1D has so far released four albums. Many of the 20 or so songs that the boys sang were engaging, danceable tunes with a rock flavor. Some standout performances: “Steal My Girl,” “Kiss You,” “Alive,” and “Strong.”

Tracks such as “Through the Dark” and “Night Changes” incorporated country inflections, while the hits “What Makes You Beautiful” and “One Thing” prompted resounding sing-alongs.

The concert wasn’t short on fan service, either. The boys played up their “bromance” to the hilt: Liam planting a smack on Niall’s cheek, and Liam and Harry seated and singing “Little Things,” arms draped over each other’s shoulders. The girls lapped it up. While shrieking still.

For many “Directioners,” the band’s Manila stop was a bittersweet experience. They were visibly disappointed by Zayn Malik’s withdrawal from the world tour titled “On the Road Again.”

A publicist for the band earlier issued a statement that said Zayn had “signed off with stress and is flying to the United Kingdom to recuperate.” Online reports, however, speculated that Zayn had gone home to appease fiancé Perrie Edwards, who had caught him cheating.

Not a few followers remained hopeful to the bitter end that Zayn would somehow appear on 1D’s second night in the Philippines. He is regarded as the group’s best vocalist, the one with the widest range.

The concert ended with a spirited performance of “Best Song Ever,” followed by a fantastic fireworks display. “We love 1D! We love 1D!” the fans chanted, as red, heart-shaped figures burst across the sky. And then they swooned and screamed and giggled some more.