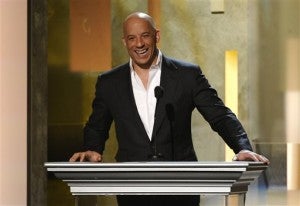 FILE – In this Feb. 22, 2015 file photo, Vin Diesel speaks on stage at the 45th NAACP Image Awards at the Pasadena Civic Auditorium in Pasadena, Calif. Vin Diesel, who announced Monday, March 23, 2015, on the Today Show that he named his newborn daughter Pauline in honor of his late friend and longtime co-star Paul Walker, revealed that some old advice from Walker had been top of mind in the moment. Vin Diesel, and Walker, co-starred in the Fast & Furious” franchise. (Photo by Chris Pizzello/Invision/AP, File)

LOS ANGELES—Vin Diesel, who named his newborn in honor of late friend and longtime co-star Paul Walker, says his participation in the child’s birth was all because of some advice Walker once gave him.

“I might never have gone into a delivery room if it wasn’t for Paul,” Diesel told The Associated Press on Monday. Earlier, Diesel announced on the “Today” show that daughter Pauline was named after Walker, who died in 2013 at age 40 in a car crash while on a break from shooting the seventh installment in the “Fast and Furious” franchise.

Seven years ago, before Diesel, 47, and longtime partner Paloma Jimenez welcomed daughter Hania, 6, into the world, Walker, also a father, offered a bit of wisdom.

“Paul (told) me to go into the delivery room and own it and be present and don’t shy away from it and cut the umbilical cord. I didn’t even know what an umbilical cord was!” said Diesel.

Jimenez and Diesel are also parents to a son, Vincent, 4.

Sitting under a crisp white umbrella at a “Furious 7” press event at Dodger Stadium, Diesel turned quiet and reflective while discussing Walker, who he has referred to as his brother.

“Seven years later, going into the same delivery room, I couldn’t help but to have my brain go back and reflect about the best piece of advice that anyone ever gave me,” he said.

“When I was cutting the umbilical cord and looking at Paloma, I heard his advice,” said Diesel. The actor added, “When it came time to write down the name,” his choice was Pauline.