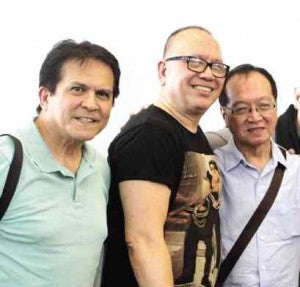 FROM LEFT: Romero, Reyes and Chionglo.

We listened to the country’s film masters and mavericks at the OneMalaya forum at the De La Salle-College of St. Benilde last Feb. 26. Director Joey Reyes initiated the forum “so that filmmakers and students of film and media can learn from each other.”

Reyes explains, “Cinema can only be alive if a relationship is forged between filmmakers. The more solid this relationship becomes, the bigger the chance to create an evolving national cinema.”

An interesting take on the Metro Manila Film Festival ignited a heated discussion between the directors: Romero noted, “The movie industry is alive only during the MMFF.”

A classic example is Dan Villegas’ “English Only, Please.” It was revealed in the forum that Jennylyn Mercado and Derek Ramsay weren’t the first choices for its leads, but Villegas’ movie ended up Top 4 at the box office. He added, “Directors should know their audience!”

When it comes to censorship, Gallaga recalls how it was from the 1970s to the ’80s: “Some of the best movies in the second golden age of Philippine cinema were helmed by Brocka and Bernal, and were produced during one of the most corrupt and repressive regimes, especially in terms of censorship.”