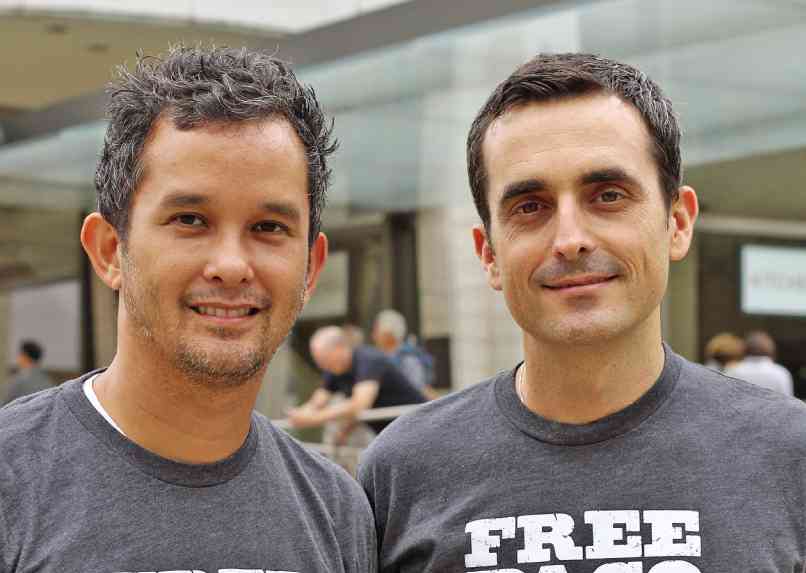 SYJUCO AND COLLINS. From “Give Up Tomorrow” to “Almost Sunrise.”

LOS ANGELES—“Give Up Tomorrow,” Michael Collins and Marty Syjuco’s award-winning controversial documentary which examines the trial of Paco Larrañaga, one of the suspects in the kidnap-murder of students Joy and Jackie Chiong in Cebu in 1997, debuts on Philippine television this weekend.

A microcosmic look at judicial corruption, the Emmy Award-nominated “Give Up Tomorrow” was shortened and re-titled “Innocent on Death Row” for television. The winner of two awards in the 2011 Tribeca Film Festival is scheduled to broadcast on BBC World News at least four times this weekend.

The film will also air globally on BBC World News. Shown in various film festivals where it received critical acclaim, the documentary raised human rights groups’ support for Paco, a man of dual Filipino and Spanish citizenship, who is serving a life sentence in a prison in Spain. Paco was transferred from the New Bilibid Prison under a prisoner exchange treaty signed by the Philippines and Spain.

Marty, the film’s Filipino producer, said, “‘Innocent on Death Row’ is a shortened version of ‘Give Up Tomorrow,’ the feature length film. BBC had to do a cut-down of the film in order to fit the time slot of Storyville Global. This is a very common occurrence when feature films are brought to television.

“TV slots are mostly one hour. When PBS aired ‘Give Up Tomorrow’ across the United States, it was 12 minutes shorter than our theatrical version. Unfortunately, when this happens, you have to cut crucial scenes. For example, in our case, the judge’s suicide.”

The New York-based filmmaker said that, as a result, “‘Innocent’ is a different film. It is only 50 minutes long compared to the feature version’s 95 minute running time. But, the BBC editor was able to retain the emotional core of the film.”

For the Manila-born Marty, the film’s broadcast premiere in the Philippines brings him both personal and professional fulfillment. “Our broadcast on BBC World is remarkable for me, because this marks our Philippine television premiere,” he said.

“There’s nothing like the reach of television. BBC estimates that ‘Innocent’ will reach 300 million homes worldwide, with 25-30 million viewers.”

The producer stressed, “I’m hoping that the bulk of that will be in the Philippines. It’s always been my dream to bring Paco’s story to my home country. My hope is for Paco’s story to help others. I believe he’s not the only one wrongfully convicted in our prison system.

“In fact, there are also his six co-accused, still languishing in Bilibid Prison after 18 years. When we visited Bilibid, we heard of many similar stories. It’s shocking and heartbreaking. So many prisoners are victims of frame-ups, and were not given fair trials.

“That is why we need organizations like the Innocence Project in the Philippines. They use DNA evidence to overturn wrongful convictions. Unfortunately, in Paco’s case, the DNA was not secured or preserved properly.”

He traced the film’s long journey before its Manila broadcast debut this weekend: “After ‘Give Up Tomorrow’s’ theatrical release in the Philippines in 2012, I worked very hard to get it on Philippine television. I met with all the local broadcasters. Initially, there was so much interest, but the powers that be behind the Chiong case are very strong.

“All the broadcasters dropped out one by one. They got scared, because ‘Give Up Tomorrow’ uncovers the gross ineptitude of our Supreme Court.

“The lack of a Philippine broadcast has left me very frustrated, and I feel like I failed as a Pinoy filmmaker. It’s been a huge source of disappointment for me. Finally, three years later, I’m so excited to have our Philippine television premiere. As a Pinoy artist who is committed to creating social issue documentary films, I can say that this is a dream come true. Now I feel like I can really move on to my next project.”

Marty revealed details of his new feature. “For the past two years, I’ve been working with my partner Michael Collins on our new film. ‘Almost Sunrise’ tells the inspiring story of two friends, ex-soldiers, who embark on an epic journey across America to heal from war.

“We expose the alarming suicide crisis happening in the veteran community that nobody is talking about—22 vets take their own life each day. We literally walked 2,700 miles across America with these two guys!

“The film was shot cinéma vérité-style, with the splendor of small-town Americana providing the backdrop to this emotional adventure. And, it was shot by brilliant Filipina cinematographer Clarissa delos Reyes. It has thrilling, funny, heartfelt and poignant moments.

“We captured the remarkable transformation of these two guys, as we see them heal from their internal wounds of war. We’re currently editing the film for which we recently received financial support from ITVS, Tribeca, the IDA and Bertha Foundation. If all goes well, our plan is to bring ‘Almost Sunrise’ to screens and television next year!”

More information about the BBC World News broadcast of “Innocent” is available at: www.bbc.co.uk/programmes/ n3csxklb/broadcasts.