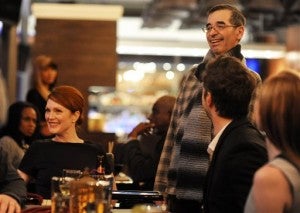 In this image released by Sony Pictures Classics, actress Julianne Moore, left, and director Richard Glatzer appear on the set during the filming of “Still Alice.” Glatzer died Tuesday, March 10, 2015, in Los Angeles after a four-year battle with ALS. He was 63. (AP Photo/Sony Pictures Classics, JoJo Whilden)

LOS ANGELES— Richard Glatzer, who co-wrote and directed the Alzheimer’s drama “Still Alice” alongside his husband, Wash Westmoreland, while battling ALS, died Tuesday in Los Angeles. He was 63.

Diagnosed in 2011 with ALS, also known as Lou Gehrig’s Disease, the pair took on the project of “Still Alice” in a very early stage of Glatzer’s disease.

During the 23-day shoot, Glatzer communicated with one finger using a text-to-speech app on his iPad. By the time of the press tour for the film in late 2014, Glatzer was only able to communicate by typing on the device with his big toe.

Their film earned star Julianne Moore her first Oscar for her portrayal of an academic suffering from early onset Alzheimer’s. Unable to attend the ceremony, Glatzer watched Moore’s win Feb. 22 from a hospital, where he had been taken two days prior for respiratory problems. Westmoreland watched by his side.

A New York native, Glatzer started out his career in academia, earning a doctorate in English from the University of Virginia before turning his attentions entirely to film and television.

He met Westmoreland in 1995. The couple collaborated on four films as co-writers and directors, including the 2006 Sundance Grand Jury Prize and Audience winner “Quinceañera.”

Glatzer also worked on a number of television shows including “Road Rules,” ”Divorce Court” and “America’s Next Top Model.”

But it was “Still Alice” that seemed to be Glatzer’s crowning achievement.

“It’s ironic that in my deteriorated state I’d be able to make a film that was creatively everything I’d ever wished for,” Glatzer reflected to The Associated Press in late 2014 while promoting the film.