Gaye’s daughter Nona Gaye wept as the verdict was read and was hugged by her attorney.

“Right now, I feel free,” she said outside court. “Free from … Pharrell Williams and Robin Thicke’s chains and what they tried to keep on us and the lies that were told.”

“Blurred Lines” has sold more than 7.3 million copies in the U.S. alone, according to Nielsen SoundScan figures. It earned a Grammy Awards nomination and netted Williams and Thicke millions of dollars.

The case was a struggle between two of music’s biggest names: Williams has sold more than 100 million records worldwide during his career as a singer-producer, and Gaye performed hits such as “Sexual Healing” and “How Sweet It Is (To be Loved by You)” remain popular.

The verdict could tarnish the legacy of Williams, a reliable hit-maker who has won Grammy Awards and appears on NBC’s music competition show “The Voice.”

He and Thicke are “undoubtedly disappointed,” said their lead attorney, Howard King.

“They’re unwavering in their absolute conviction that they wrote this song independently,” he said. 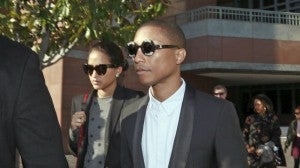 In this Wednesday, March 4, 2015 photo, Pharrell Williams and an unidentified woman leave Los Angeles Federal Court after testifying at trial in Los Angeles. A jury says singers Williams and Robin Thicke copied a Marvin Gaye song to create “Blurred Lines” and awarded more than $7 million to Gaye’s family. The eight-person panel reached the decision Tuesday, March 10, 2015, after hearing nearly a week of testimony about similarities between “Blurred Lines” — the biggest hit of 2013 — and Gaye’s 1977 hit “Got to Give It Up.” AP

Thicke and Williams earned more than $7 million apiece on the song, according to testimony.

King has said a decision in favor of Gaye’s heirs could have a chilling effect on musicians who try to emulate an era or another artist’s sound.

Larry Iser, an intellectual property attorney who has represented numerous musicians in copyright cases, was critical of the outcome.

“Unfortunately, today’s jury verdict has blurred the lines between protectable elements of a musical composition and the unprotectable musical style or groove exemplified by Marvin Gaye,” Iser said. “Although Gaye was the Prince of Soul, he didn’t own a copyright to the genre, and Thicke and Williams’ homage to the feel of Marvin Gaye is not infringing.”

Their lawyer, Richard Busch, branded Williams and Thicke liars who went beyond trying to emulate the sound of Gaye’s late-1970s music and copied the R&B legend’s hit “Got to Give It Up” outright.

The family “fought this fight despite every odd being against them,” Busch said after the verdict, which could face years of appeals.

Thicke told jurors he didn’t write “Blurred Lines,” which Williams testified he crafted in about an hour in mid-2012.

Williams testified that Gaye’s music was part of the soundtrack of his youth. But the seven-time Grammy winner said he didn’t use any of it to create “Blurred Lines.”

During closing arguments, Busch accused Thicke and Williams of lying about how the song was created. He told jurors they could award Gaye’s children millions of dollars if they determined the copyright of “Got to Give It Up” was infringed.

King denied there were any substantial similarities between “Blurred Lines” and the sheet music Gaye submitted to obtain copyright protection.

Williams has become a household name — known simply as Pharrell — thanks to his hit song “Happy” and his work as a judge on the “The Voice.” He wrote the majority of “Blurred Lines” and recorded it in one night with Thicke. A segment by rapper T.I. was added later.

Williams, 41, also signed a document stating he didn’t use any other artists’ work in the music and would be responsible if a successful copyright claim was raised.

The trial focused on detailed analyses of chords and notes in both “Blurred Lines” and “Got to Give It Up.”

Jurors repeatedly heard the upbeat song “Blurred Lines” and saw snippets of its music video, but Gaye’s music was represented during the trial in a less polished form. Jurors did not hear “Got to Give It Up” as Gaye recorded it, but rather a version created based solely on sheet music submitted to gain copyright protection.

That version lacked many of the elements — including Gaye’s voice — that helped make the song a hit in 1977. Busch called the version used in court a “Frankenstein-like monster” that didn’t accurately represent Gaye’s work.

An expert for the Gaye family said there were eight distinct elements from “Got to Give It Up” that were used in “Blurred Lines,” but an expert for Williams and Thicke denied those similarities existed.

Gaye died in April 1984, leaving his children the copyrights to his music.