Lamb of God set to raise a ruckus in Manila 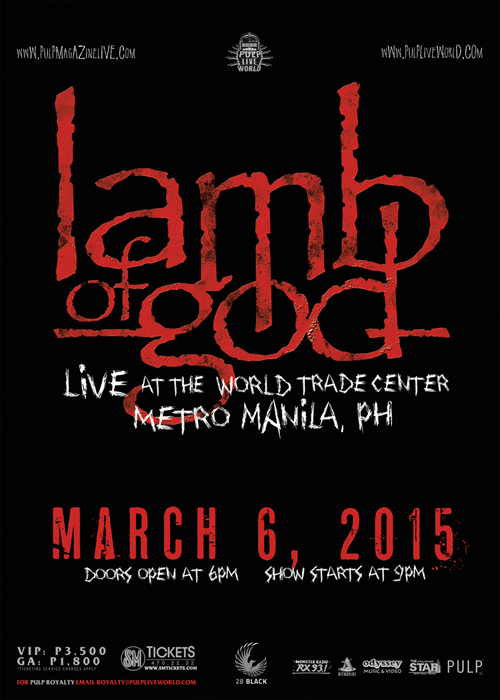 MANILA, Philippines—At 43 years old, Lamb of God vocalist Randy Blythe is a man who can’t be stopped. Blythe, who has been leading Lamb of God, resulting in a massive metal movement for almost two decades, described his band’s live performances as “fresh” and “exciting” in an interview with Modern Fix earlier this year. “I find playing our music live fresh and exciting. Seeing a good metal band live and put on a kick-ass show—that makes me … want to raise some ruckus. I find that exciting in [a] live experience.”

With a string of seven albums on its belt, Lamb of God continues to tear the rock charts. The band’s critically acclaimed album “New American Gospel” combines grit and power, making it an instant classic as it earned a place in Revolver Magazine’s coveted list of 69 Greatest Heavy Metal Albums of All Time.

The late 2000s saw Blythe and company continuing to rise on metal’s radar, as Lamb of God’s albums “Wrath” and “Sacrament” debuted at number two and eight respectively on the Billboard charts. “Set to Fail” and “In Your Words” were two tracks from “Wrath” that received Grammy nominations for Best Metal Performance in 2010 and 2011. Sacrament’s “Redneck” was also nominated at the Grammys for the same category in 2007.

PULP Live World and The New Wave of American Heavy Metal summon a legion. The date is set for Lamb of God: Live in Manila. Get ready to witness Blythe raise a ruckus through an onslaught of brutal and hard-hitting hits delivered straight into your ears.

PULP Live World together with 28 Black proudly announces the return of Lamb of God. Doors open at 6 p.m. Show starts at 9. Tickets are now available via SM Tickets. Tickets are priced P3,500 (VIP) and P1,800 (GenAd). For ticket inquiries, please log on to smtickets.com. For PULP Royalty inquiries, please email [email protected] or contact the PULP Royalty hotline at 727-4957. “Lamb of God: Live in Manila” is also brought to you by Odyssey and Astroplus.