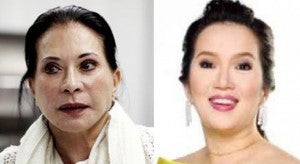 Reacting to a Philippine Daily Inquirer story which quoted her aunt Tingting as saying “I’ll just leave the country,” when asked what she thought about the possibility of Kris Aquino running for public office, the TV host said, “super dedmabels sa mga nega (I will just ignore those who are negative).”

“Because if the (tradeoff) [of] having to put up with them was having the privilege of having Cory Aquino as our mother, what a teeny tiny price to pay. In fact it’s so minute as to have no bearing anymore on our happiness and solidarity as siblings!” Kris on Wednesday posted on her blog.

Tingting is the wife of Peping, a brother of Cory.

The two former politicians have recently been active in criticizing their nephew President Benigno Aquino III and calling for changes in the government following the botched Mamasapano operation which resulted in the deaths of 44 elite commandos from the Special Action Force. They also spearheaded a mass protest on Edsa on Sunday against Aquino.

Kris also reiterated that she was not running for public office—not in 2016, at least.

“(But) politics is not happening this 2016. For now, I am blessed to be an entertainer (host and occasional actress), an endorser, a producer, a website owner, a restaurant franchise owner, an investor, and a mother,” Kris wrote.

Kris, however, isn’t closing doors on a possible run for public office in the future. In fact, she already has a “campaign plantform.”

“I have never cheated the government of money, and I know how hard it is to sign those BIR payment checks when you are fearful of where the money will go. I was 100% trustworthy in paying my taxes, you can be sure I will be 100% trustworthy in taking care of yours.

“Plus and most importantly you all know what you’re getting in me, I have no skeletons in any closet left, hanggang bulalo ko alam n’yo na ang kwento. And sa kadaldalan ko, may anomalya bang magaganap na makakalusot (You know me down to my bone marrow. With my being a blabbermouth, will any anomaly happen and not be exposed)?” Kris said. IDL

Pangilinan worried missing Pharmally files may have been ‘cleaned’