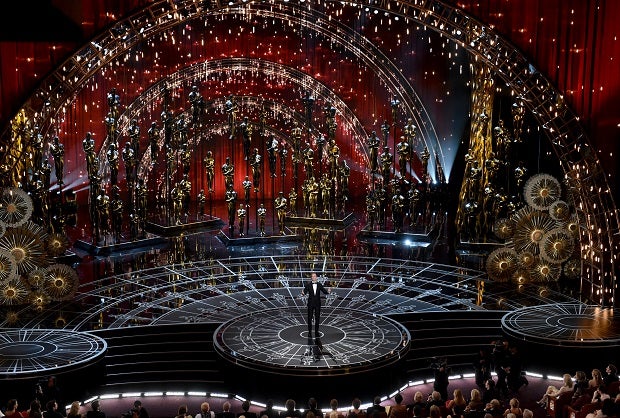 Host Neil Patrick Harris speaks at the Oscars on Sunday, Feb. 22, 2015, at the Dolby Theatre in Los Angeles. AP

The Nielsen company’s preliminary estimate of U.S. viewership was down from the 43.7 million people who watched last year, a feel-good show where host Ellen DeGeneres attracted attention for posting a “selfie” with various movie stars and having pizzas delivered to the audience.

Last year’s show, which also had the star power of “Frozen,” Matthew McConaughey and U2, reached the biggest audience for any Academy Awards show since 2000.

The Oscars tend to be the most-watched entertainment program of the year on television, often second only to the Super Bowl. But viewership can be affected by the relative popularity of the movies up for big awards, and best picture winner “Birdman” wasn’t a particularly big box office draw. “American Sniper” was the most popular movie, but received one relatively minor award.

There was also a movement among black viewers to boycott the awards show because all of the major acting nominees were white. There’s no way to immediately tell whether this had an impact on the decrease in viewers since Nielsen did not have an immediate breakdown of ethnic viewership.

This year’s Oscars audience was the lowest since 36.3 million watched in 2009, when “Slumdog Millionaire” won best picture.

After a couple of years where awards show ratings in general were going up — a reflection of the desire among viewers for live programming — they appear to have flattened.

Nielsen also said there were 5.9 million messages about the Academy Awards sent out through Twitter in the U.S. That’s roughly half the 11.2 million tweets sent out last year, when DeGeneres’ selfie replicated like wildfire online.

Facebook said there were 58 million interactions worldwide on the Oscars, including posts and “likes.”

The biggest individual moment for Twitter and Facebook was the same: Lady Gaga’s medley of songs from “The Sound of Music.”

Read Next
From women’s rights to tighty whities
EDITORS' PICK
‘A greener, cleaner tomorrow’: A how-to guide for Filipinos who want to help with today’s energy crisis
DOH: Second person ‘under investigation’ for 2019-nCoV in Tacloban City
Taal Volcano flexes signs of restiveness anew
SM continues to send relief assistance to remote towns in Batangas
China expands lockdowns to 25M people to halt viral outbreak
Get exciting deals and discounts when you download the new McDonald’s App
MOST READ
PH to ‘start process’ of VFA termination — Locsin
172 Chinese tourists arrive in Bohol
Lacson on Duterte’s threat to end VFA over Bato’s canceled visa: Where is the connection?
DOH: Second person ‘under investigation’ for 2019-nCoV in Tacloban City
Don't miss out on the latest news and information.