Bridging the generational music gap in ‘Only You’ Valentine concert

If there’s one thing I learned from all of this, it’s that one should never judge a concert by its artists.
By: Vida Lacano
INQUIRER.net / 08:46 PM February 23, 2015

MANILA, Philippines—As a millennial, a night out with my mom to watch singers from the 60’s on a Valentine evening is an idea that would have sent me sliding down the padded seats of PICC to oblivion. Don’t get me wrong, it’s not embarrassing in any way; I just find it weird. As somebody who appreciates music in general, this is fine with me. But to date my parents? Priceless.

But after almost two hours of non-stop display of legendary musicality from Matt Monro, Jr., The Platters, our very own Christian Bautista and even the Kilyawan Consortium of Children’s Choir , I just had to admit that it was a show really worth watching. If there was one thing I learned from all of this, one should never judge a concert by its artists.

First, there was the Kilyawan Consortium of Children’s Choir. What could be cuter than a group of kids in matching costumes singing to a medley of Beatles hits? Okay, they weren’t just cute–they were adorable. They opened the show for the celebrated performers, singing gleefully while dancing in unison. But what stood out from this group is that despite the differences in age amongst its members, they sang in perfect harmony.

Christian Bautista sets the mood for everyone

Afterwards, local balladeer Christian Bautista finally opened the show by performing an upbeat version of Joe Cocker’s “Up Where We Belong” which made the audience clap and dance in their seats. He then thanked everyone for coming despite the hurdle of traffic jams and proceeded to sing songs from his 2004 self-titled album. He also paid tribute to some of OPM’s distinguished singers from yesteryears such as Hajji Alejandro, Rick Segretto, and Raymond Lauchenco, as well as a riveting performance of some of the classic hits of balladeer Jose Mari Chan. Bautista performed a few more songs off his album, such as “The Way You Look At Me,” which he credits as his most life-changing recording ever, before giving the floor to the next performer.

Matt Monro, Jr and the legacy his dad left him

Matt Monro Jr. has been touring the world and bringing his father’s music legacy with him, which was evident throughout his performance. He also performed songs from other great artists like Frank Sinatra and Tony Bennett. The 51-year-old English singer didn’t show signs of stopping as he performed song after song after song, such as “Save The Last Dance For Me,” and a medley of some of his father’s greatest songs which included “Portrait of My Love,” and “Walk Away.” Matt Monro, Jr.’s most notable performance for the night was when he once again called the Kilyawan Children’s Choir on stage and sang “Softly As I Leave You,” with Matt changing into Barong Tagalog and the children providing background vocals for him. He continued to sing his father’s priceless pieces such as “Born Free,” and “My Way” before ending his set with a beautiful performance of Matt Monro’s hit single “We’re Gonna Change The World” where he sang alongside his father’s videotaped performance from the 60s. 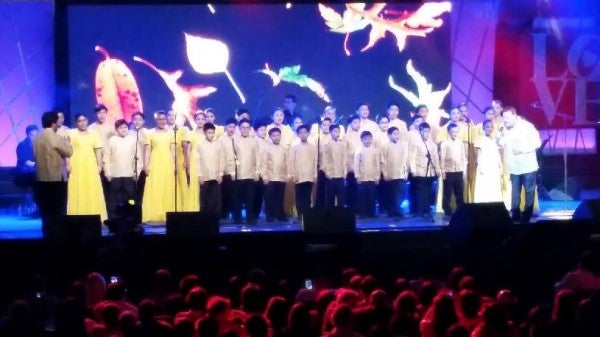 This widely successful R & B vocal group from the 60’s was the highlight of the concert, with the crowd going crazy when they went on stage and performed “The Great Pretender” as their opening song. However, what was noticeably different in the group is that their female member is considerably younger than the rest of them. Dressed in matching red suits, they went on to sing their classic hit songs such as “Twilight Time,” the very lovely ballad “Smoke Gets In Your Eyes,” “Stand By Me,” and “Harbour Lights” among others. But the highlight of their set was the performance of “Only You,” which also happens to be the title of the concert. The audience sang with the group, to the delight of the members of The Platters. They then called Christian Bautista and Matt Monro, Jr. to the stage once again and performed the bubbly song “My Girl” before finally capping the show with a wonderful rendition of Lionel Richie’s chart-topping, feel-good 1983 hit “All Night Long.” 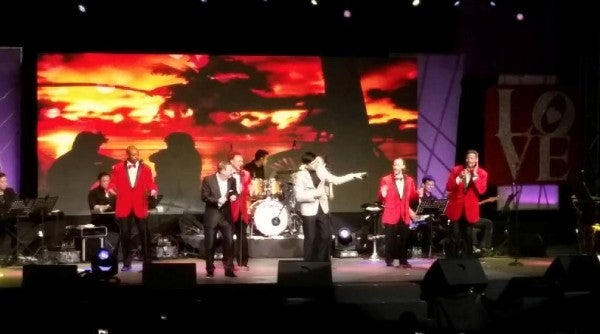 Overall, it was a good show. People may not be bouncing and screaming like how they do in pop concerts these days (there was an obvious target audience bracket here, of course) but if you’re someone like me who appreciates all kinds of music, then there’s probably room in your heart for a little hearty doo-wop and big brass. My mom would agree.