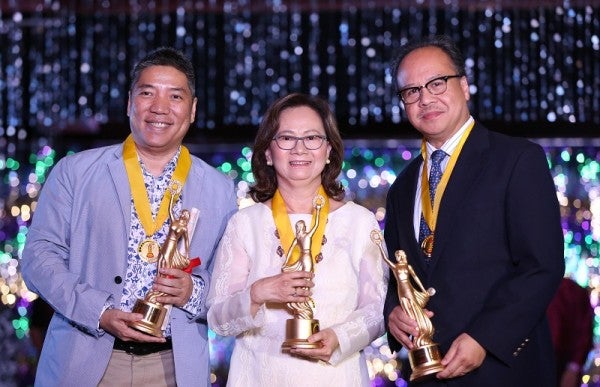 The multimedia organization’s flagship, the Philippine Daily Inquirer, won the best newspaper award (national broadsheet) for “continuing to be a game-changer in print media.”

“The task of reporting the truth is a difficult task. And I would like to thank the staff of the Philippine Daily Inquirer for having sustained its energy and courage in carrying out its work,” publisher Raul Pangalangan said in his acceptance speech during the awards ceremony held at Ernesto Crisostomo Hall of the University of Perpetual Help System Dalta in Las Piñas City on Thursday.

Composed of critics and humanities professors from member schools, Gawad Tanglaw—founded by its chair, Romeo Flaviano Lirio—aims to recognize excellence in the fields of television, film, radio and print.

“We teachers learned that a lot of students use the Inquirer when we give out assignments,” Lirio told the Inquirer.

Ambeth Ocampo won the best columnist award for his biweekly column in the Inquirer, “Looking Back,” for giving readers “a wider perspective not only of history but [also] of the Filipino story as a whole.”

“PDI’s entertainment section isn’t solely focused on gossip; it also aims to inform the readers about the industry’s other aspects,” Lirio said.

Aside from trophies, the winners received medals and certificates of recognition.