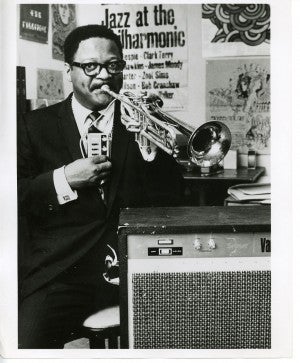 NEW YORK— Clark Terry, a Grammy Award-winning jazz trumpeter who played in the orchestras of both Count Basie and Duke Ellington and on “The Tonight Show” and collaborated with jazz greats including Dizzy Gillespie and Thelonious Monk, has died. He was 94.

Terry’s wife announced his death on his website late Saturday night. Gwen Terry’s statement did not provide further details and she did not immediately respond to messages from The Associated Press.

Born in St. Louis, Terry started playing music as a child. After a stint in the Navy from 1942 to 1945, he worked in a number of bands, joining Count Basie’s orchestra in 1948 and Duke Ellington’s in 1951. In 1960, he joined the house band for “The Tonight Show” and stayed for more than a decade.

Terry was a frequent performer and prolific recording artist with hundreds of recordings to his credit over his decades in the music industry. The list of famous names he recorded with also included Ray Charles, Sarah Vaughn, and Ella Fitzgerald.

Wynton Marsalis, artistic director of Jazz at Lincoln Center, and the orchestra had recently played a concert for a hospitalized Terry in Arkansas in December. He wrote at the time, Terry “was the first great jazz trumpeter I had ever heard actually playing live. His spectacular playing made me want to practice (of course) but his warmth and optimism made me to want to be a part of the world of jazz.”

A strong proponent of jazz education, Terry taught at camps, clinics and festivals, and was an ambassador for the musical form around the world.

In 2010, Terry was the given a Grammy Lifetime Achievement Award.