Heart happy with wedding party, without her folks 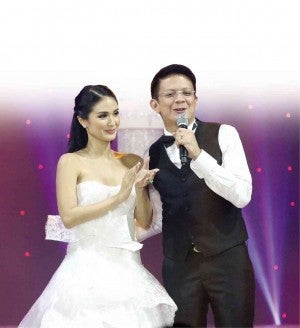 Heart Evangelista’s parents, who refused to attend their daughter’s wedding to Sen. Chiz Esucero at the Balesin Island Club in Quezon province on Feb. 15, were still nowhere in sight during the newlyweds’ reception party Wednesday evening at The Blue Leaf Filipinas in Parañaque City.

Not that the GMA 7 star was expecting anything.

At least, the actress said, she got to speak with her father, Reynaldo Ongpauco, before the event. “He congratulated me and told me that he was happy for me… and that’s good enough for me,” Heart told reporters in a brief interview, shortly after the celebration.

“So many good things have happened; I really can’t complain,” added the 30-year-old actress, who had a falling out with her parents two years ago over her relationship with the senator.

Another no-show at the post-wedding festivities was best man President Aquino, who didn’t attend the wedding, either, upon Sen. Chiz’s request.

Many of the 1,200 invited guests thought Aquino would turn up this time, especially because members of the Presidential Security Group started arriving at the venue late in the

afternoon. However, the President—who’s been criticized for allegedly prioritizing events deemed frivolous over more pressing concerns—opted to conduct an unscheduled six-hour 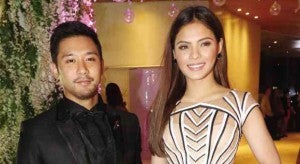 dialogue with the families of the “Fallen 44” in Camp Crame.

In any case, Mr. and Mrs. Chiz Escudero apparently had a great time reliving their special day, this time sharing it with friends, families and loved ones during the party dubbed “Chiz & Heart: Love, Finally,” which started with the two dancing to Sade’s “By Your Side,” performed by Jonalyn Viray.

The rest of the night rolled out much like a concert, with recording artists—mostly from GMA 7, Heart’s home network—feting the newlyweds and the rest of the crowd with topnotch performances. 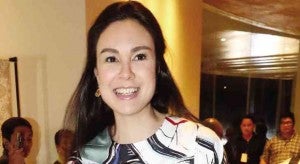 Aicelle Santos, Maricris Garcia, Jonalyn, Julie Ann San Jose and Frencheska Farr belted out, and harmonized in, “At Last” and “Make You Feel My Love,” while Christian Bautista and Kris Lawrence upped the tempo with “Best Day of My Life.”

After her rendition of “God Gave Me You,” Regine Velasquez-Alcasid was joined onstage by her husband Ogie Alcasid for a duet of “Come What May.”

The newlyweds cuddled at their table as Gary Valenciano serenaded them with the ballad “How Did You Know”—the same piece that Mark Bautista sang as Heart courageously marched down the aisle by herself on her wedding day.

Aside from the music, the event—hosted by Christian, Jaya and Tim Yap—featured an audio-visual presentation that showed some of the most lighthearted and poignant moments of 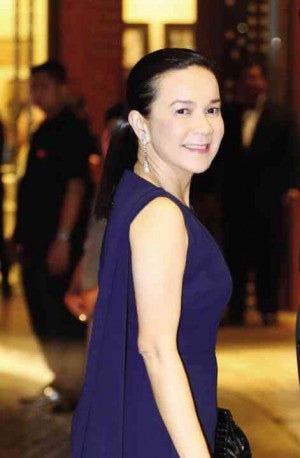 their wedding. Another video featured Mr. and Mrs. Escudero talking about how their relationship blossomed, after being hooked up by Sen. Miriam Defensor-Santiago.

“When I became single, Sen. Miriam gave me a list of the country’s most eligible bachelors. She put Chiz on No. 1 because she heard that [he had just had an annulment],” said Heart, who donned a Monique Lhuillier creation. “I never made it to No. 2.”

Smiling and giggling throughout the evening, Heart and Sen. Chiz table-hopped to check on guests, and very graciously obliged for photo-ops.

They gamely observed wedding traditions, such as the taking off of the bride’s hose garter, and the cutting and eating of the cake—which, to gasps of awe, descended from the ceiling on fancy and sparkly chandeliers.

To resounding applause, Philip welcomed Heart to his family, then raised his glass and said, “To love and happiness forever!” 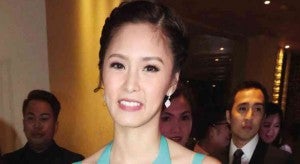 “Thank you to everyone who made time to share this moment with us; you’re all part of this journey,” Sen. Chiz told the crowd.